Since apparently we're children here, i need to set some ground rules for this thread.

DO: Post reviews of your setup, other setups, opinions on setups, experiences, anecdotes. Feel free to do these things by any means necessary. I don't care if there's a ton of profanity, if you compare a setup to the amount of times Uranus gets pounded by large objects at a high rate of speed, i don't care if you feel like saying your ebay sleeves and springs on your 200k worn out NA bilsteins is better than Xidas. That's your opinion and you're welcome to it. You may post your opinion on any setup being discussed, any ad copy being discussed, and you may compare your setup to anything you like.


Since this is my thread, and i'm a moderator, and this is one of the only good threads on this forum, i will enforce the rules. I may very well do so without warning. If you're worried about receiving a ban over a post, then don't make the post. Super simple stuff.

Budget Ballers, this thread is for you. You want real performance, but you're on a Ramen budget. You lust after Xidas, but you don't have the patience to save for them. You have the money for Megan Racing coilovers, but you're smart enough to know that they're complete and total garbage when it comes to performance.

You're in luck. Many Miatas came with shocks that are actually quite good. Your car might even have them. They're called Bilsteins. My guide will not go hugely in depth in terms of WHICH shocks are right for you. I will just give all information i have on them. This will focus mostly on length and which "fits" your car best. We can discuss the nitty gritty in subsequent post, and i'll update with info as it comes up.


Step 2: Choosing Your Top Hats
A large portion of this will be determined by your shock choice, as well as your spring rate choice. We'll keep this simple: If you have travel issues and are riding on bumpstops constantly, these will need to be addressed.

From order of shortest to longest: NA, NB, Custom/ISC/Garagestar

Here's a general rule, obviously with many exceptions depending your budget, wants, and setup.

Basically, it's never a bad idea to spring for some NB top hats at a minimum. If you're using NB shocks, i'll just say that you NEED NB hats, or you're going to have a bad time. NA shocks on an NA, your call. Won't kill you if you're sprung properly.

Step 4: Choosing your Bump stops
A large portion of this is determined by your budget and if you're interested in future-proofing your setup or not. I've linked the FCM bump stop guide in post #3 (link to be added later), that you can use for a basic guide.

Start from the top. Cut off 30-35mm of the smallest diameter section and throw them on your shock shaft.

Then, IF USING NB or ISC hats, cut the second largest "disk" out of the bumpstop. (You'll see what i mean.) Retain that for later use. (FCM uses these in place of the upper rubber hat bushing, and so should you.)

Congratulations, for all intents and purposes, you just made FCM bumpstops.

You Like Ramen, But Only The Good Kinds Bump Stop #2:
For $46.88 + shipping, you can make a pretty decent setup that won't offend anyone. Buy four of these. http://www.acuraexpressparts.com/oe-acura/51722se0003

These are rubber, don't bother with the second disk like you would with the Swank Force Racing Approved Bump Stops, since this will just be like stock, but not fit as well. Throw the rest away, use stock bushings in your top hats.


You Only Want Bump Stops So You Don't Break Things:
Have i got great news for you! This will only be $25.28 + shipping. Buy four of these. http://www.hondapartssales.com/lisle/jsp/item.jsp?srchwords=51722-SR0-003

If you're someone that will use these, you're probably someone using Ebay sleeves/perches as well. These are the cheapest way to ensure that you won't blow out your circlips that your Ebay sleeves are sitting ON, instead of OVER. If you're going to do cheapass, do it right.


Should I Use Stock Bumpstops?
What i'm putting in this thread is not meant to be a Bible, so you can do what you want. However, i have a set of MSM bumpstops that i considered using. The problem is that they're REALLY soft, which sounds like a good thing, but also gives you the potential to TRULY bottom out your stuff, which feels REALLY bad. Try at your own risk. I will not recommend it.


Step 5: Do You Want Other Fancy Stuff?

-Shocks anointed in garlic oil to ward off vampires
-Springs bathed in scented rose water carried in a bathtub touched by Jesus himself
-Bump stops created in my very own Feng Shui enhanced kitchen, cut by the very best Made in USA steak knife.
-Smiley Face Stickers to bring you joy inside
-Grounding straps to wear on your wrist to be connected to the car on the other end, ensuring the feeling of connection to your car
-Buttplug makes analysis probing simplified. Also brings you joy inside. Wallet removed from process.
-Never-ending supply of buzzwords
-Suspension chakra alignment 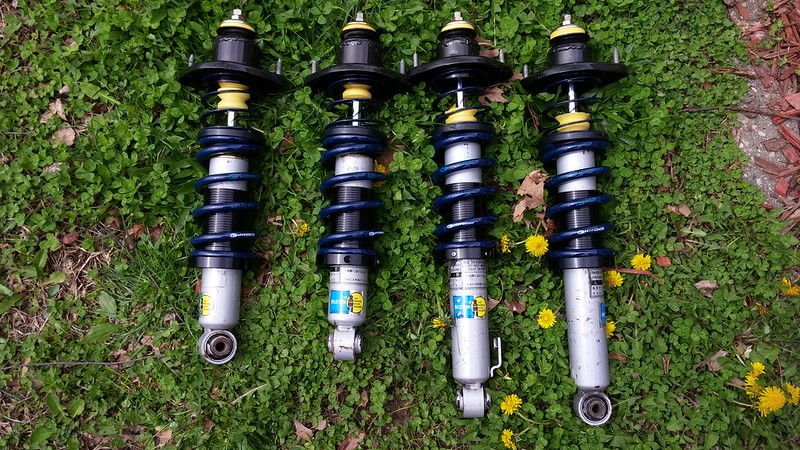 Step 1: Prep your shocks
The spring perch needs to come off. Beat it off (heh heh) with a hammer, or stick it in a press and press it off. Perch needs to come UP over the shock shaft. Don't go the other way, it won't work, and you'll mess up your circlips on the offchance that you are "successful."

Also, there's a funky thing riveted on. Remove it. I don't have pics of mine attached right now, i will add a pic later. But it went here (shown in pic). I used a hammer and a small cold chisel. Other people use a grinding/cutoff wheel. That sucks, is noisy, messy, and takes longer. 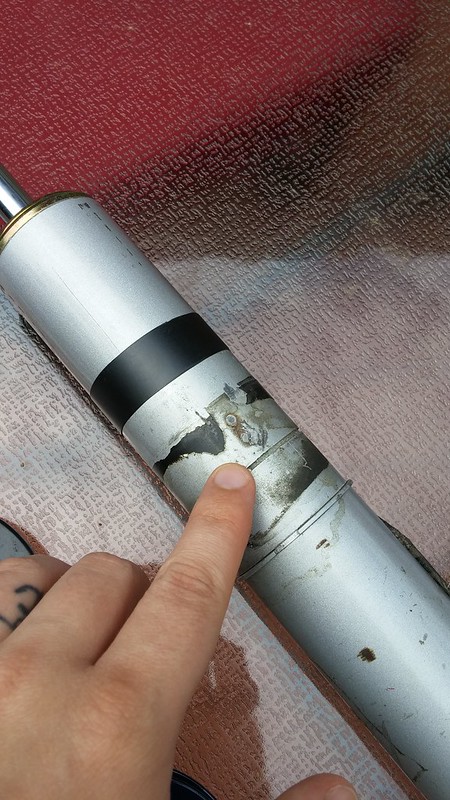 OPTIONAL: Move your circlip down.
This can give you more lowz. Mostly i just would rather move a perch up than down and find out i might want more. In my mind, moving the perch down gave me a range better suited to my personal needs. Does it matter? Probably not, but it was worth 5 minutes on a lathe. If you need explanation on how to do this, this modification is not for you.


Step 2: Gather your stuff
By now you should have your bump stops sorted and all parts purchased. If you haven't, then this step is not for you. Start over. Left to right under the shock in order of assembly: Sleeve/perch, main spring, slider, tender spring, bump stop, Home Depot Racing washers, Rubber top hat bushing, top hat, upper bushing (created from bump stop), bushing washer, nut, nut. 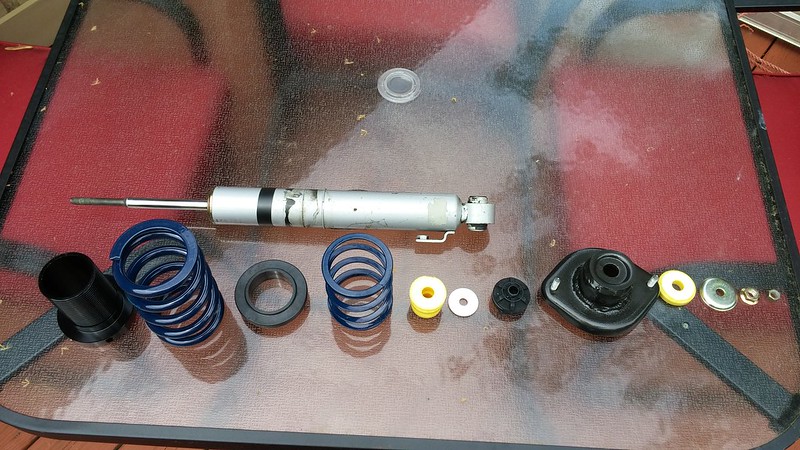 
Step 3: Put the sleeve/perch on
Self-explanatory. There's a ridge in the sleeve that sits over the stock circlip. 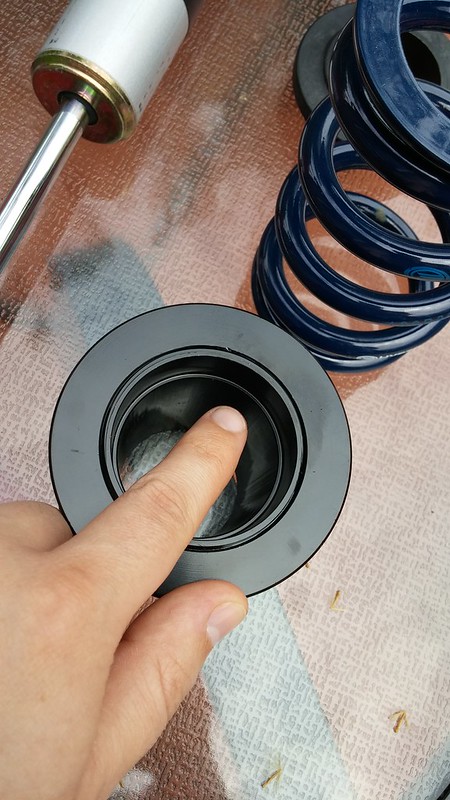 This ridge sits on circlip by concealer404, on Flickr

Then do this. Carefully wrap a band of electrical tape around the shock where the sleeve will be. Just enough that it'll still slide over it, and not move around. This prevents noise. There are probably better solutions (Cord Bauer suggests silicone "goop"), but i plan on refreshing this setup yearly, so i don't care. 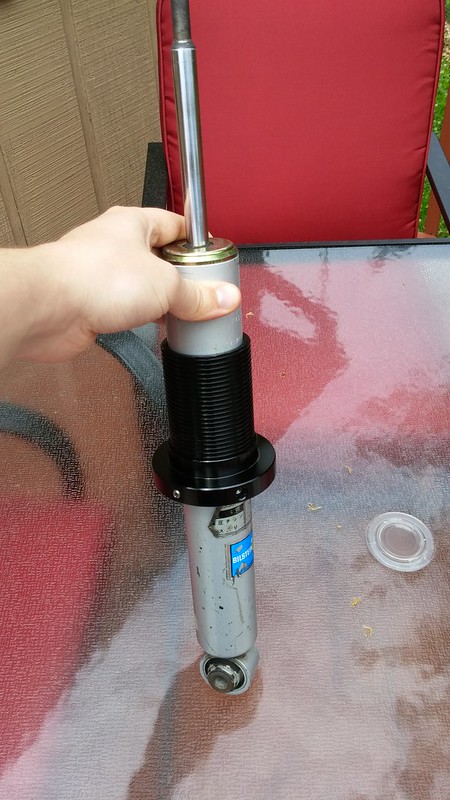 
Step 4: Put your springs on
If you have the same things i do, main spring has to go on first, then slider, then helper spring. The internet says that helper springs should actually go on bottom, but i haven't found a 2.5" slider that fits over these sleeves, and it probably doesn't matter in practice, so if you bought what i did, do as i do. 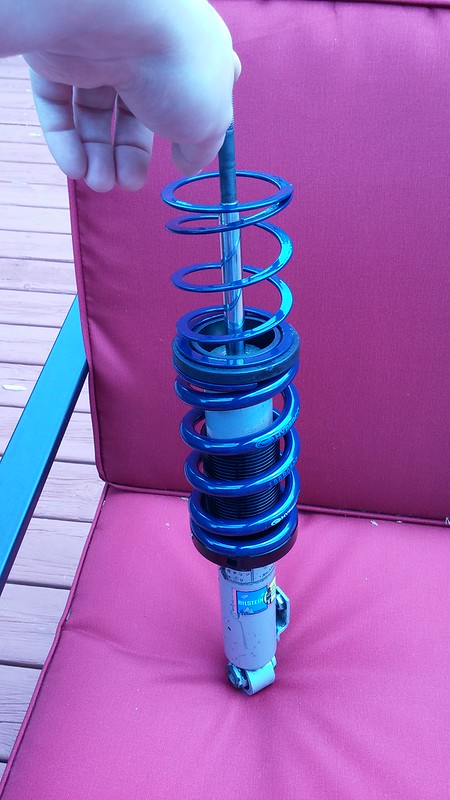 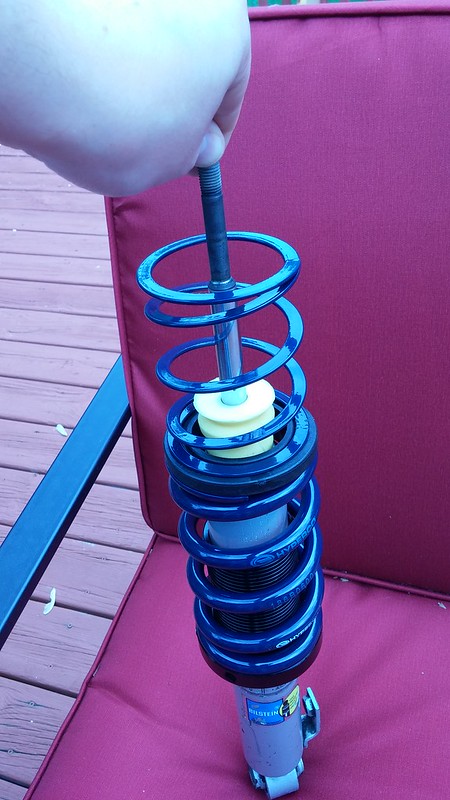 
Step 6: Home Depot Racing washers and rubber top hat lower bushings
Do this. (Jpreston has a better solution for the washers, OEM parts. Hopefully he'll chime in. I had to use these because my OEM washers were hugenormous and wouldn't fit in my modified top hats) 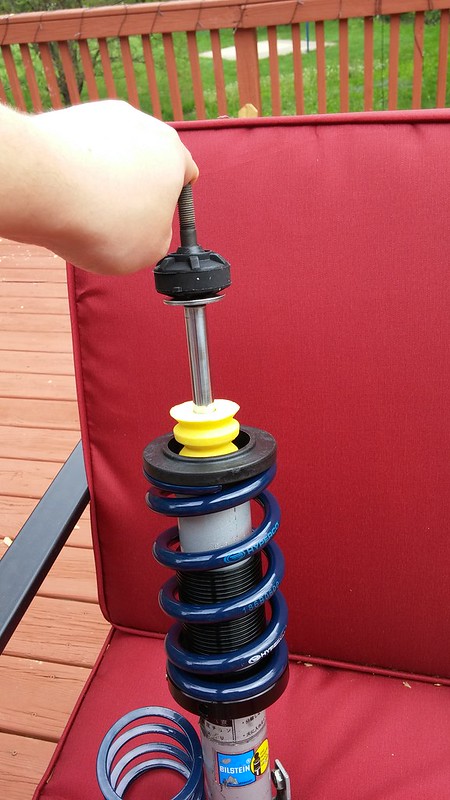 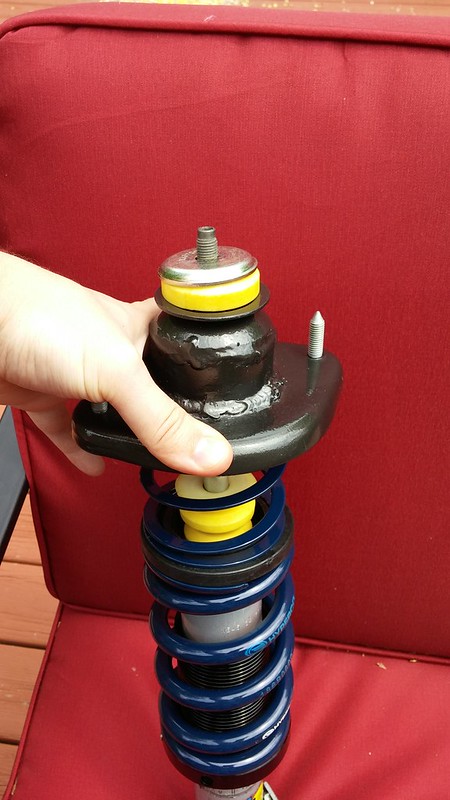 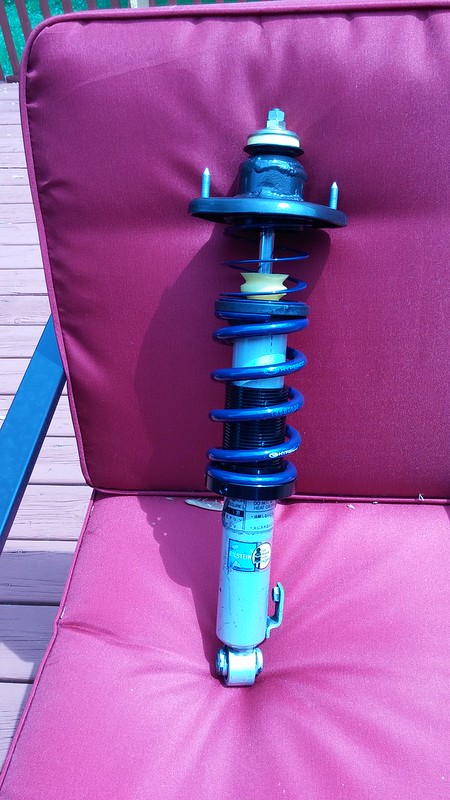 Joined Jun 18, 2011
·
15,736 Posts
Oh we open now. We're still not done, but there's enough there to start with. Post up your setups. I want pictures, details on what you used, and impressions. I'll be putting the info in the 3rd post along with links to your "review."

Questions, comments, and info welcome. I will finish fleshing out the first couple posts with info as well as details on the Zyduhz setup by the end of the week.

EDIT: wish I could read a freaking shock dyno. No matter how much it's been explained to me, I still don't understand what makes a "good" graph and a "bad" one.

Bryan said:
Finally...I've been camped outside the theater for a week now!

EDIT: wish I could read a freaking shock dyno. No matter how much it's been explained to me, I still don't understand what makes a "good" graph and a "bad" one.
Click to expand...

Even i have a pretty shaky grasp on shock dynos. We'll end up discussing them, but the takeaway here is that well.... stock shocks are stock shocks. I highly doubt anyone will be noticing HUGE differences between their stock shock choices, and if you're worried about the variances, you should probably consider getting your shocks revalved anyways.

I went with MSM shocks. Mostly because i found a low mileage set for cheap and they were available when i wanted them. Luckily, lots of people seem to think that they're the best. (And some don't.)
1 - 20 of 1646 Posts