Stuff I do with my NA.

A lame as winter came and went and the Miata has been back in service for a while. Nothing exciting to report yet.

Here it is coming out of storage...

May 28-29 brought another SLMP. Had a blast as always. It was an unfortunately rough weekend on cars, though. While I had no issues at the track, I did end up hitting a deer on the road early Sunday morning while in search of coffee.

Thankfully the damage ended up being incredibly minor... the bracket under the hood that the passenger side headlight mounts to got tweaked as did the cover (lights were on at the time). As a result the headlight was pushed back too far to close.

Made a run to the junkyard and grabbed the bracket and cover in black for $15 and threw it together to test fit and all seems well. Have it back apart now for paint, hopefully I'll be able to get to that this week.

Finally, some various SLMP pics thanks to Vermont Racing and Dooms Day Device.

Got some new tires. Needless to say they work a little better than the Capitol Sports that were on it...

These went in first. Really impressed with the results for something so simple.

I can't say enough good things about the butterfly brace. Dirt roads daily and 440/275 lb-in springs made for some moments of wondering if the poor thing was going to finally break in half. I'm not going to say the cowl shake is gone, but the improvement is MASSIVE. Probably the best money I've ever spent on this car.


A set of GarageStar fender braces should be next, they took care of what cowl shake was left after the FM rails and butterfly brace lessened it.

Plus the fender braces help with bump harshness and really tightened up initial turn in, imo and my results seem consistent with others feedback! If cowl shake is the main concern I'd actually recommend the fender braces first as they made the biggest difference. :icon_cheers:
S

Joined Oct 18, 2011
·
736 Posts
Finally got off my ass and cleaned the poor thing. Also recently got a new lens so I thought I should take some pictures to mark the occasion. 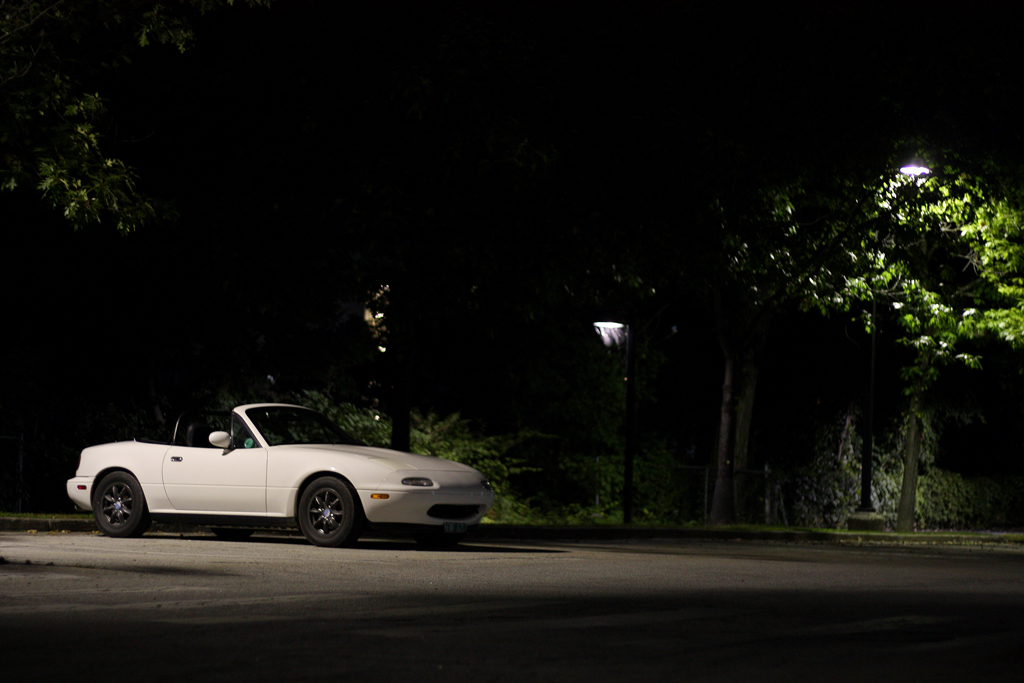 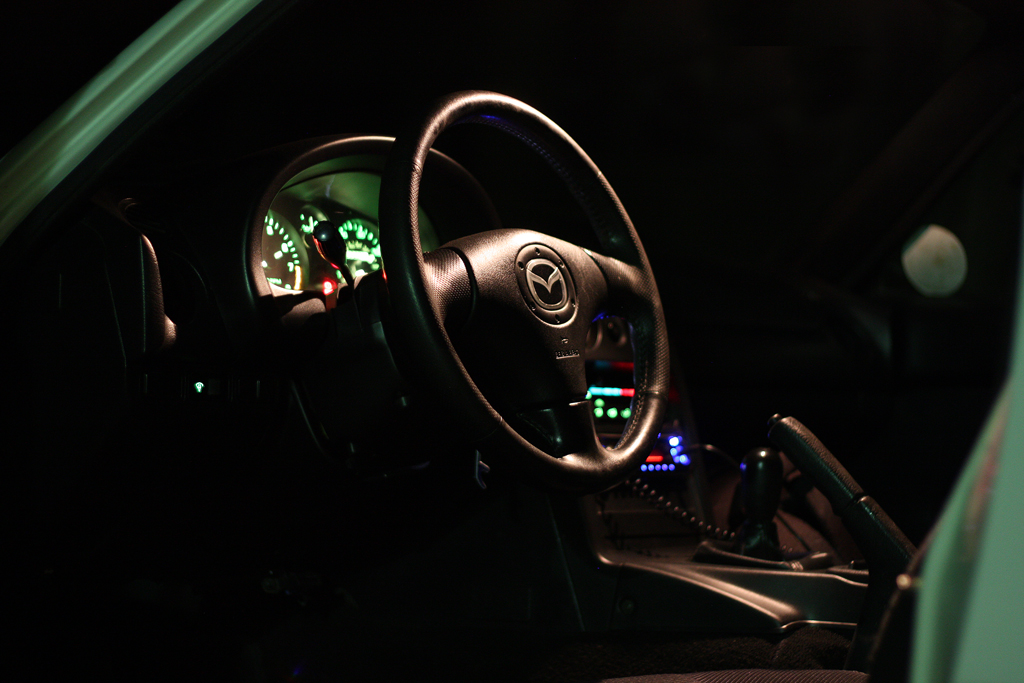 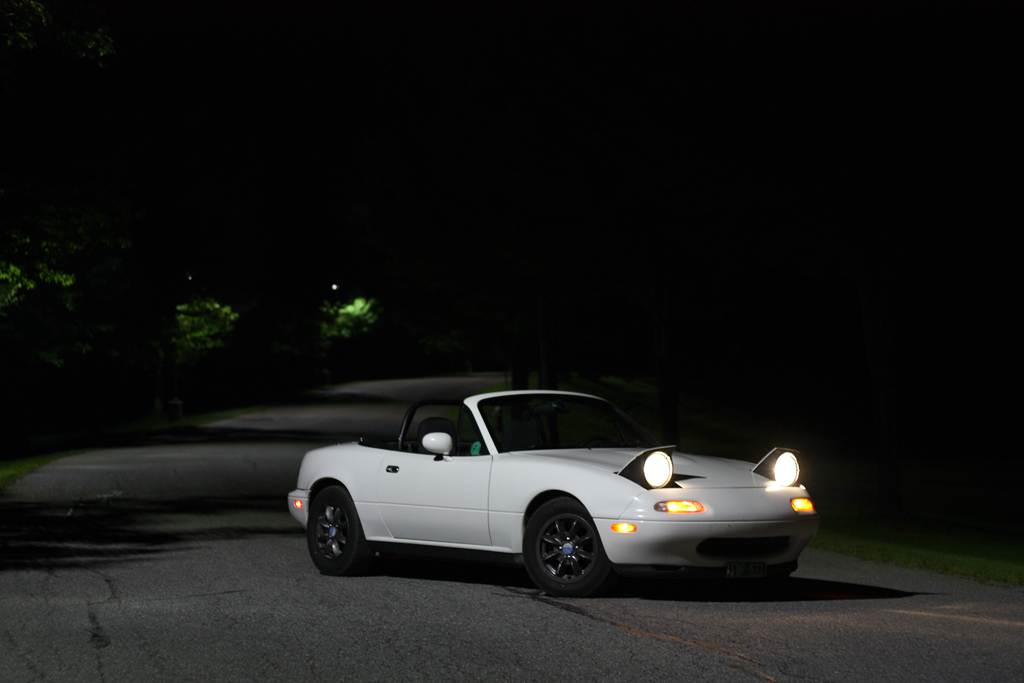 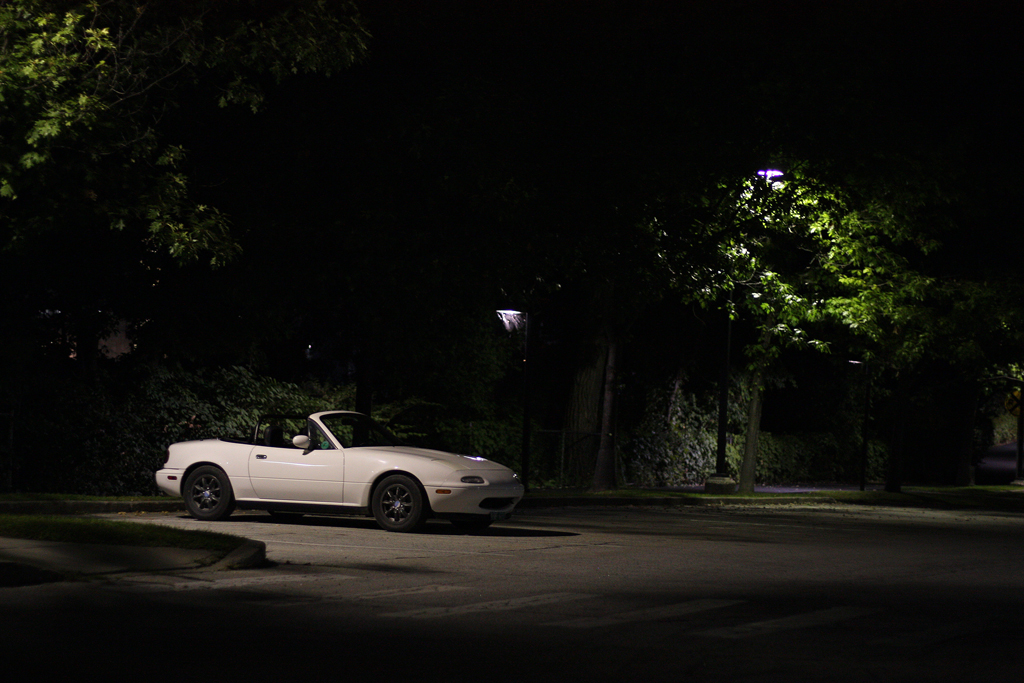 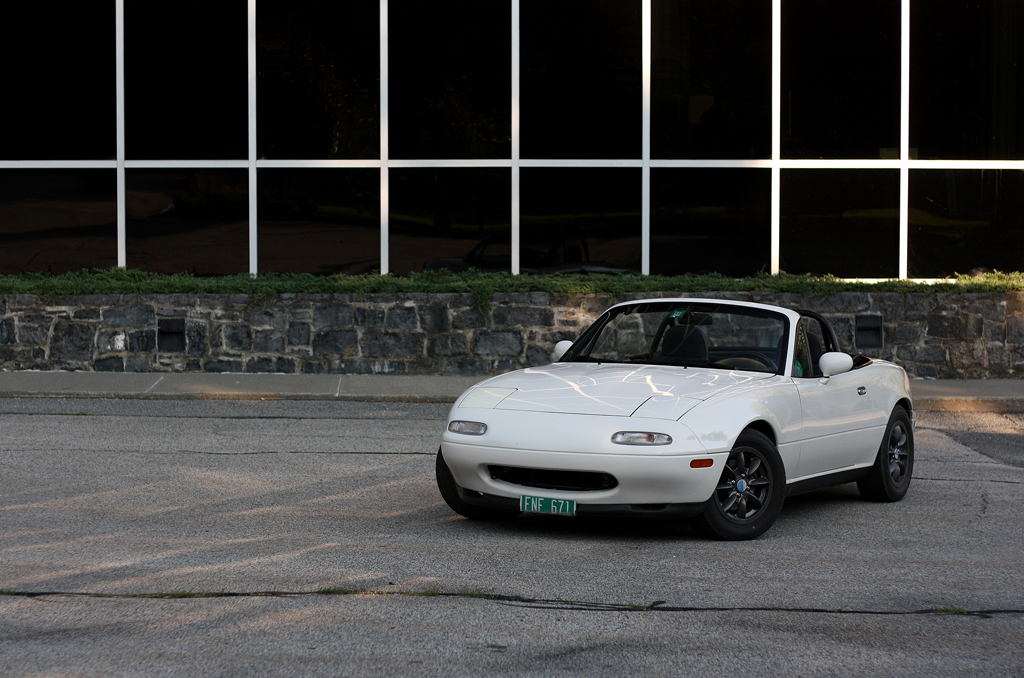 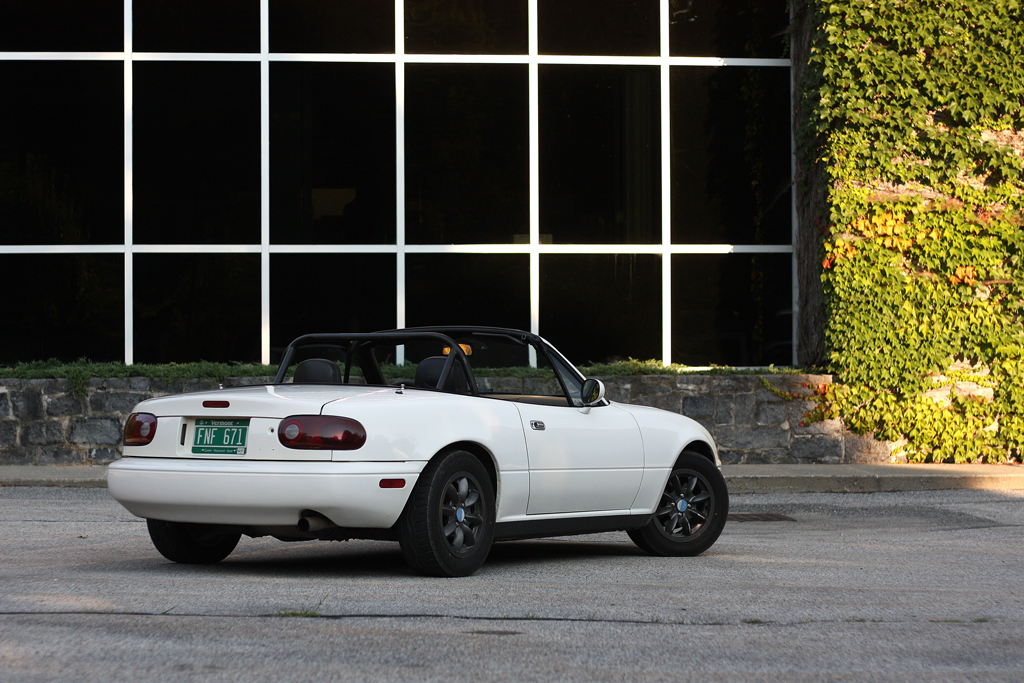 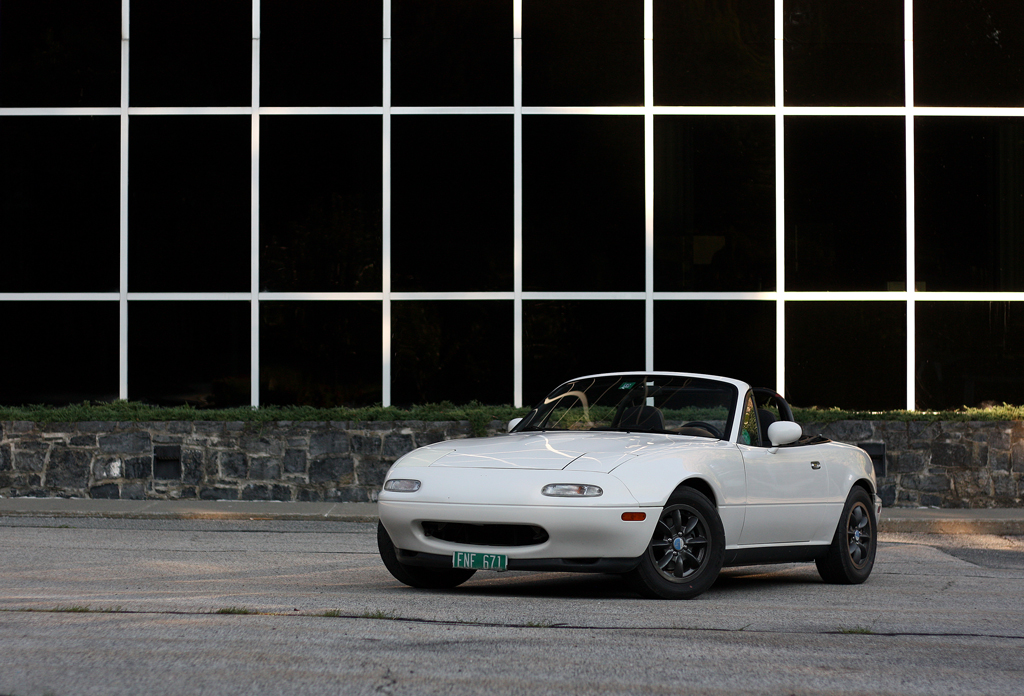 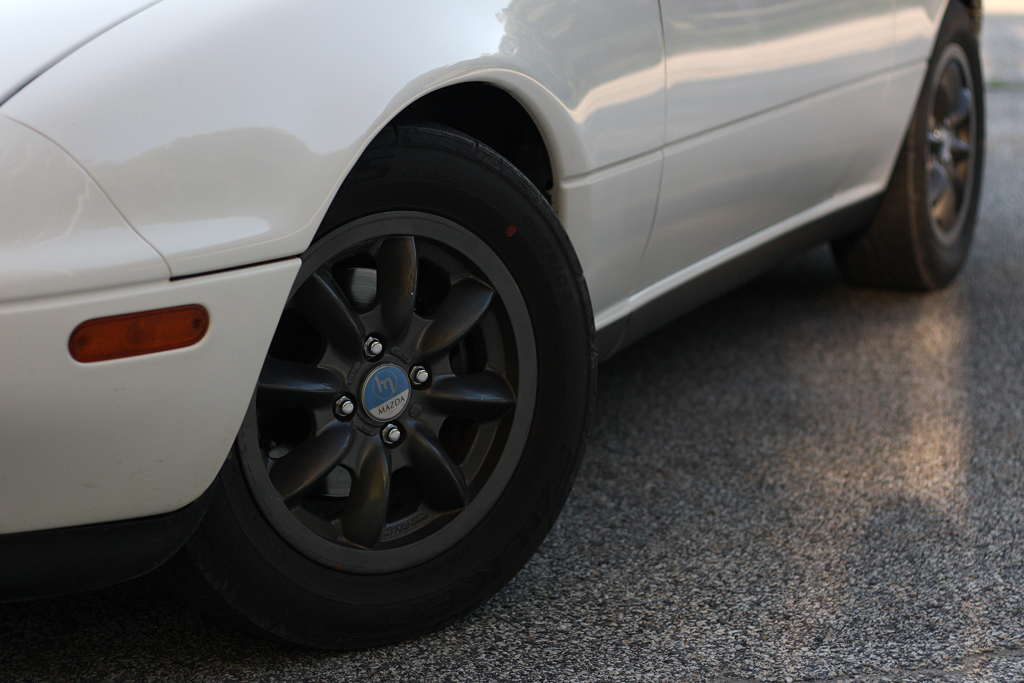 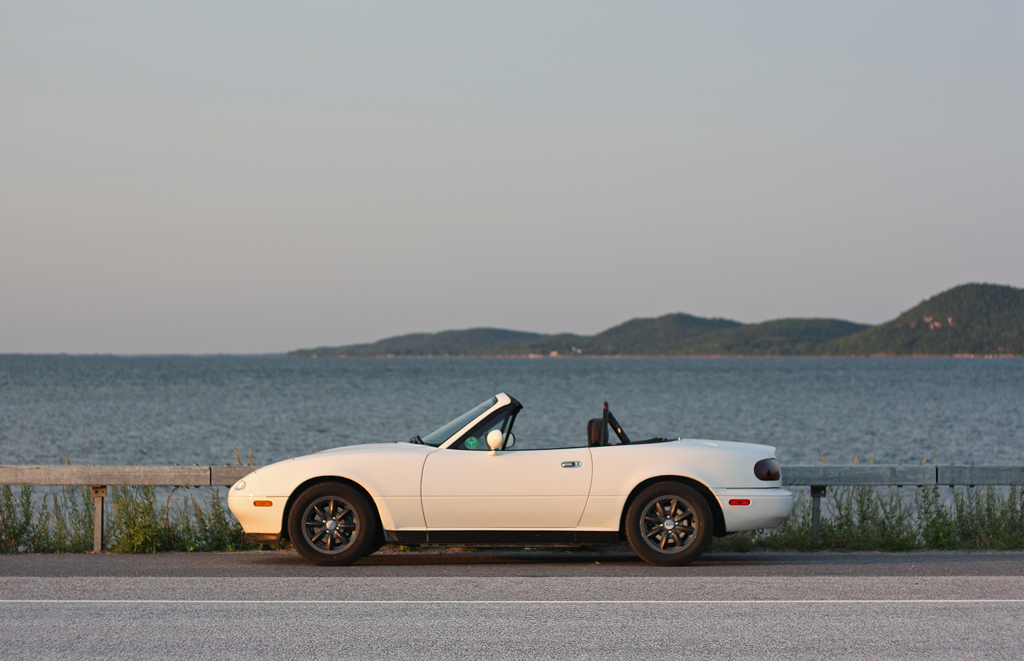 Joined Oct 18, 2011
·
736 Posts
Guessing that spring may have finally arrived in Vermont I pulled the Miata out of storage yesterday. It'll be a while yet before I can get it home as the dirt roads are still in pretty rough shape - I removed pieces of the front end of my Subaru Outback on a frost heave today.

In any case, having not seen the Miata since early November, it felt great to get in it again for a quick drive and get a little maintenance done. Changed the oil with Mobile 1 10w30 Synthetic and an OEM Mazda filter, new NGK plugs, new air filter, and put some Motul Gear 300 in the diff. Ran out of time to do the trans this time, but soon.

Since those picture suck so badly, here are a couple from the fall that I never posted. 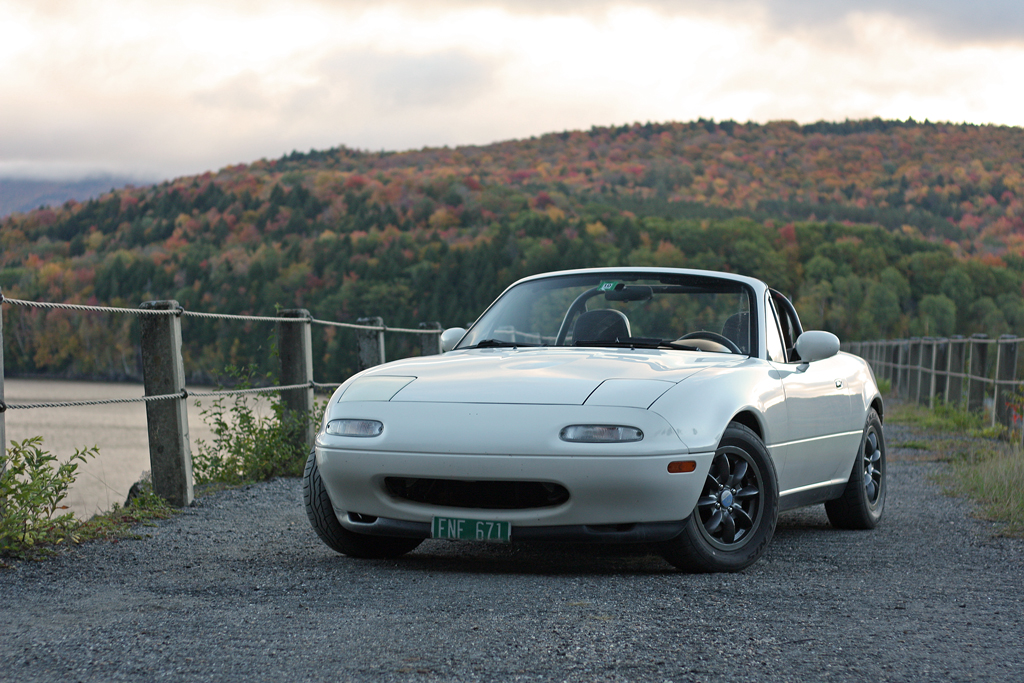 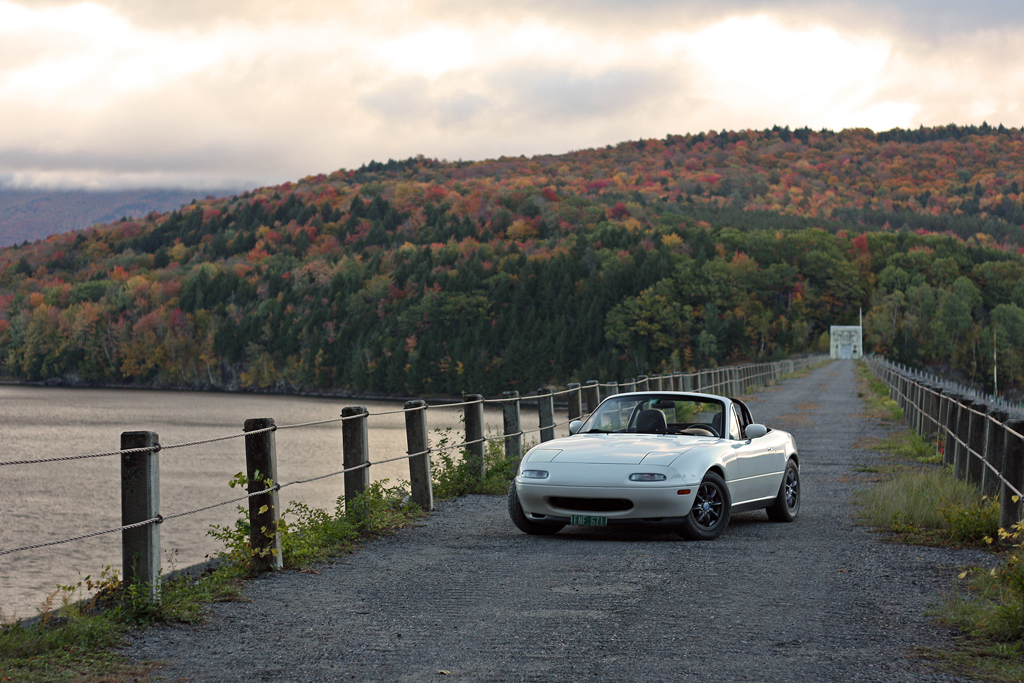 I definitely have some maintenance work ahead of my going into summer, hopefully I can squeeze some fun stuff in while I'm at it!
S


May 5-7 was this years SLMP event with SCCV. Unfortunately it may also be the last due to the track changing hands and the new owner repaving (the pavement is in a pretty dire state, crumbling and throwing chunks all over) it to focus on karts.

With the spring we have been having in the Northeast this event was... damp. Rained off and on all weekend, standing water on the track, pushing stuck cars through the mud bath in the field/pits/parking. I decided to skip camping and opt for a hotel for this one!

I don't believe I have ever done SLMP in the rain so it was a lot of fun to be able to push the car and see how it responds in adverse conditions. I didn't look at a lap time all weekend.

The car never skipped a beat. My brother and I double drove it on Sunday and, toward the end of the day, there were a couple of back-to-back-to-back sessions after which the valvetrain was a little noisy, I assume due to the oil getting hot and thin. I have been thinking it might be time to consider an oil cooler for this reason. 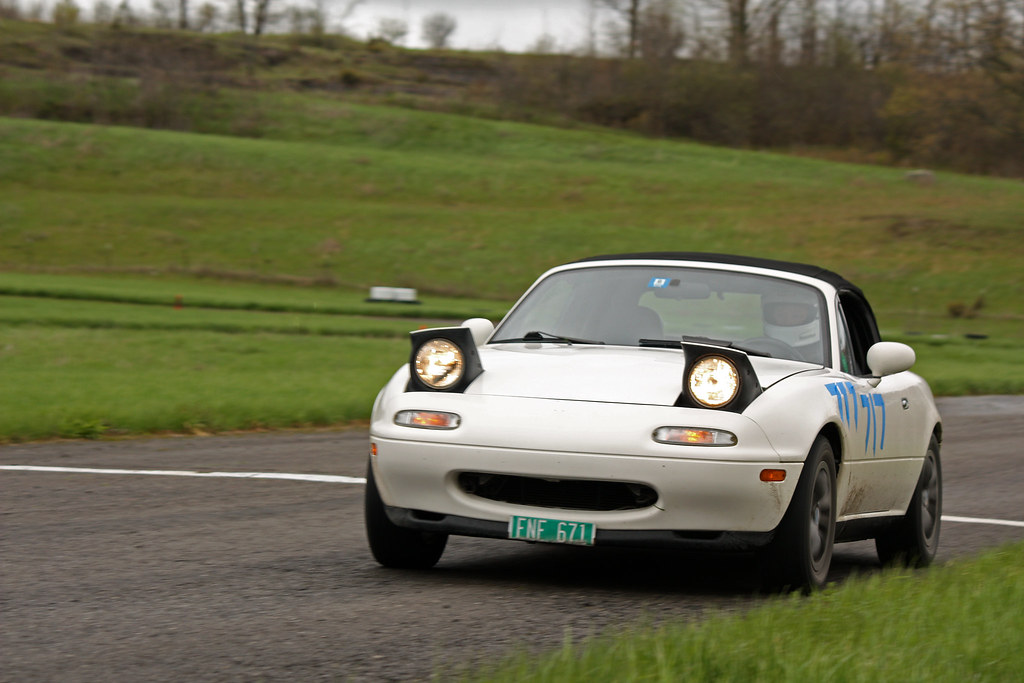 Joined Oct 18, 2011
·
736 Posts
Lets turn the clock back to 2011. I'm 19, just bought my Miata, and am desperately looking for ways to make it stand out without spending money. Debadging makes everything better, right? Obviously I go rip all the badges off the car pretty much immediately, resulting in a happy 19 year old.

The problem in all this lies in alignment pins.

THIS has been glaring at me for the past five years:

Finally, today I received an envelope.

Inside that envelope was a box

Inside that box was... joy.

Seriously. Life handed my a serious kick in the balls a while ago and opening this package put the biggest smile on my face I have had in weeks.

Oh, and the badge itself? It's above and beyond. It's perfect. Pictures can't do it justice. The only flaw it has is making other parts of the car look shabby in comparison. I have some work to do.

So I positioned it, marked it's location with a dry erase marker...

Thank you, Adam, for making these parts and for making my day. This definitely won't be the last time I send you money. :icon_cheers:
D

Another package showed up today. I found these inside:

SO stoked to get these on!

On an unrelated note, I have recently started experimenting with film photography using one of my grandfathers' old cameras - an Olympus OM-G from 1983. Just had my first ever roll of film developed, picked it up today. This was taken at ~5AM on my way out to SLMP back in May. 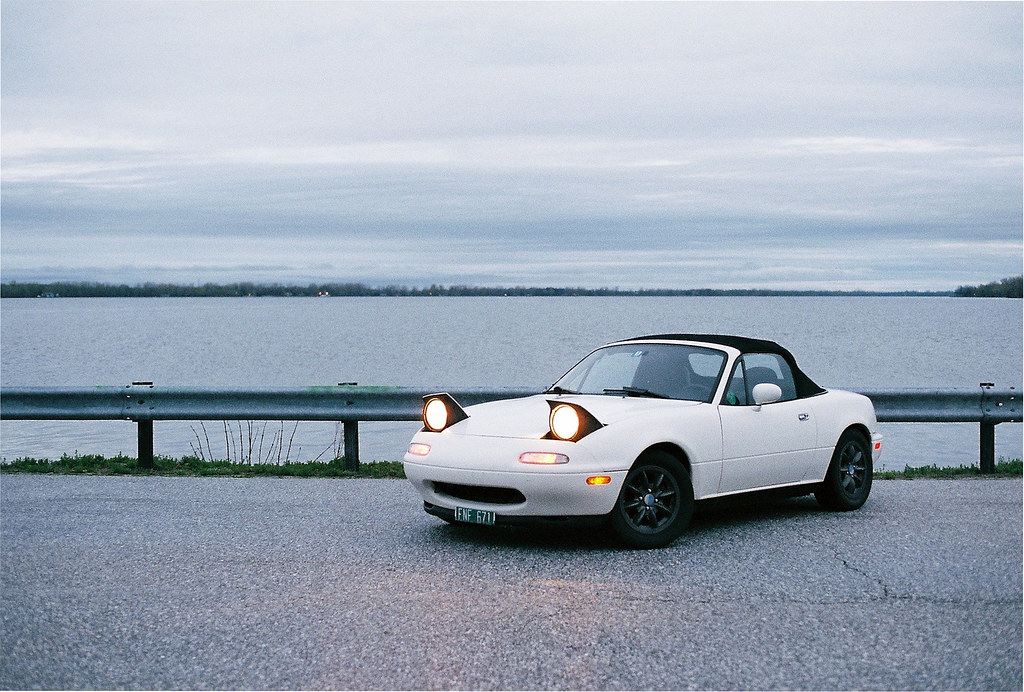 
Tackled the Strong Arms this weekend.

Step 3A: Marvel at the sheer amount of dirt and crap in there:

I was a little worried about what this area would look like with all the damp filth packed behind the fender, but I am happy to see it is still nice and clean.

Step 4: Turns some bolts and stuff

I have put a couple hundred miles on the car since installing these, much of which on very rural (read: rough) roads and I am extremely impressed. There is a BIG reduction in NVH, much more than I really expected. The chassis feels much more composed over rough roads, especially hitting a bump mid-corner. Previously things that felt like the end of the world the car can not just deal with drama free. Somehow the steering feels a little more... confidence inspiring? Its hard to put my finger on this. Maybe it's just feedback through the wheel that I'm feeling but there's something about it that's just a little bit... better.

The parts themselves are beautifully made. Removing the fenders is a little fiddly and time consuming but the installation is very straightforward and utilized existing holes in the chassis (a couple do need to be opened up to accommodate the included hardware). Fitment is spot on. Overall I would say this is a top notch product and I can't recommend them enough.
K

Joined Nov 26, 2013
·
5,016 Posts
Nice work! Fender braces are the second best bolt on chassis brace, imo. (door bars being first) I was very excited to see these on IT and definitely plan on getting a set. I absolutely loved the Garage Star fender braces but these look that much more effective. Improved steering response is not in your head, I noticed that and most others relate the same.
S

The bracing remains the best money I have spent on this car. Amazing the difference it makes, even just commuting.
S

Joined Oct 18, 2011
·
736 Posts
Yesterday I took the Miata on an early morning adventure to Mount Washington. A few times in the summer the toll road to the top of the mountain opens early enough to watch the sun rise from the 6,288' summit.

This seemed like a "must see", so I found myself pulling out of my driveway at 1:30AM and driving to New Hampshire.

Needless to say it was breathtaking. 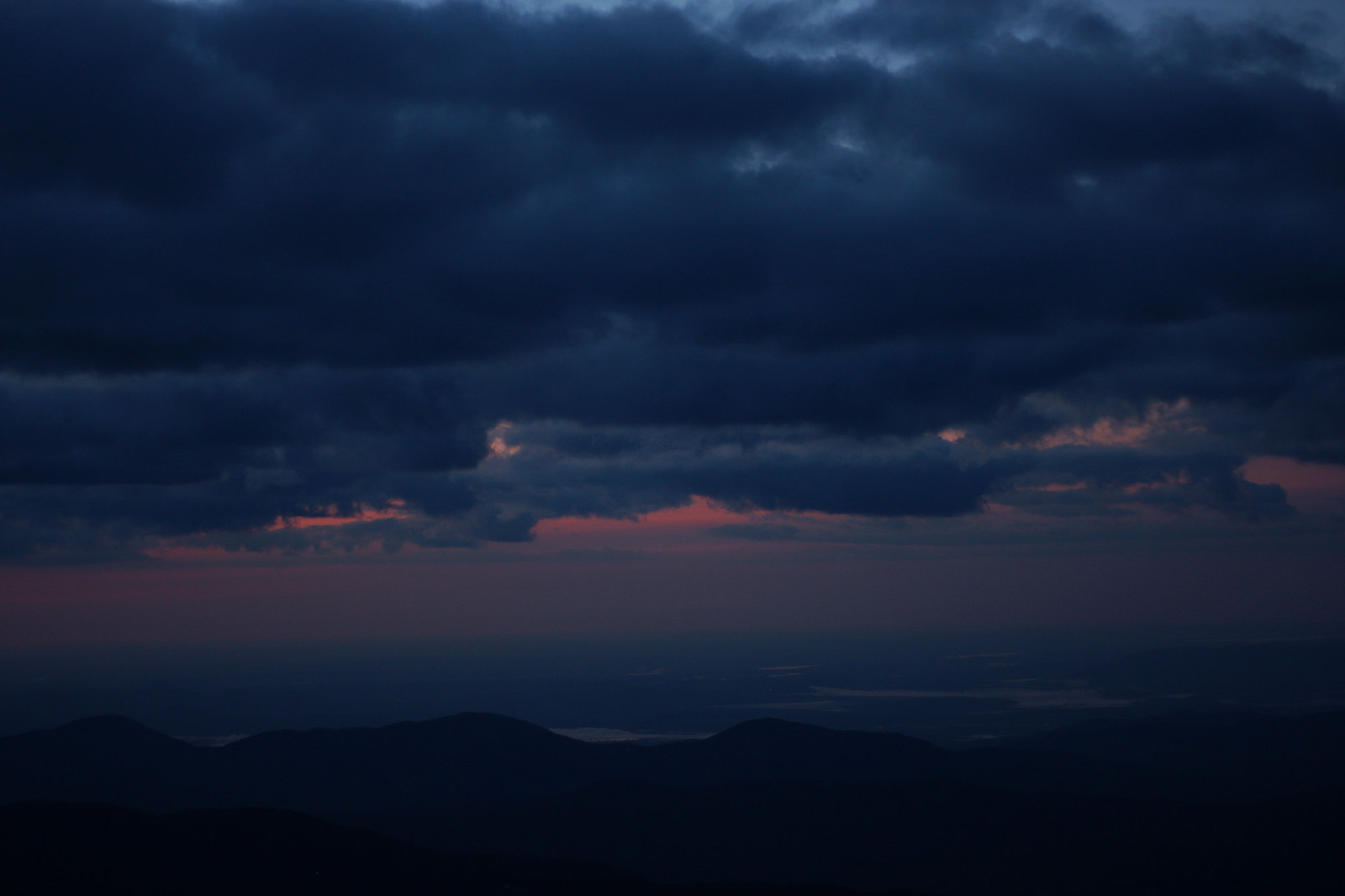 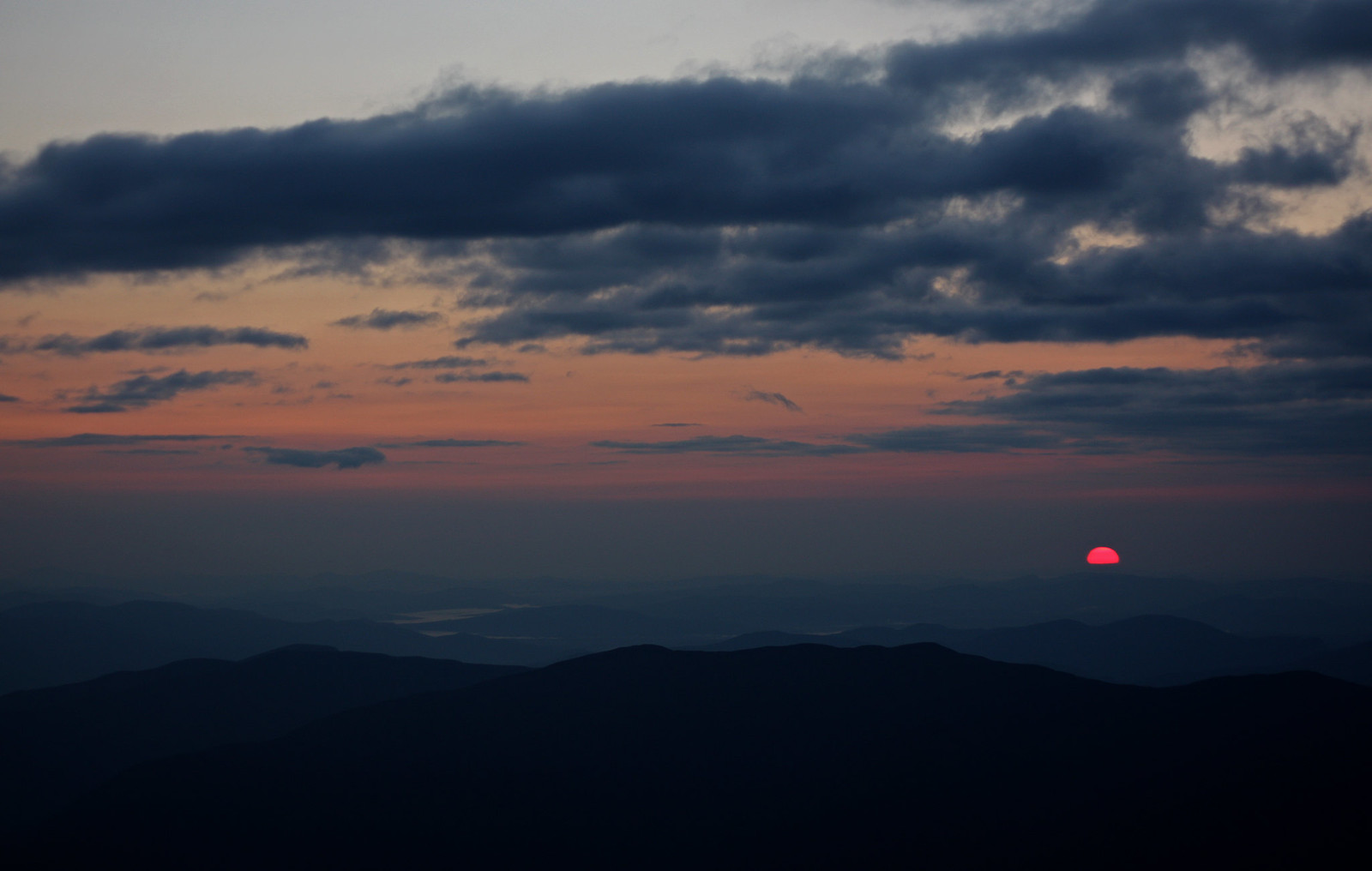 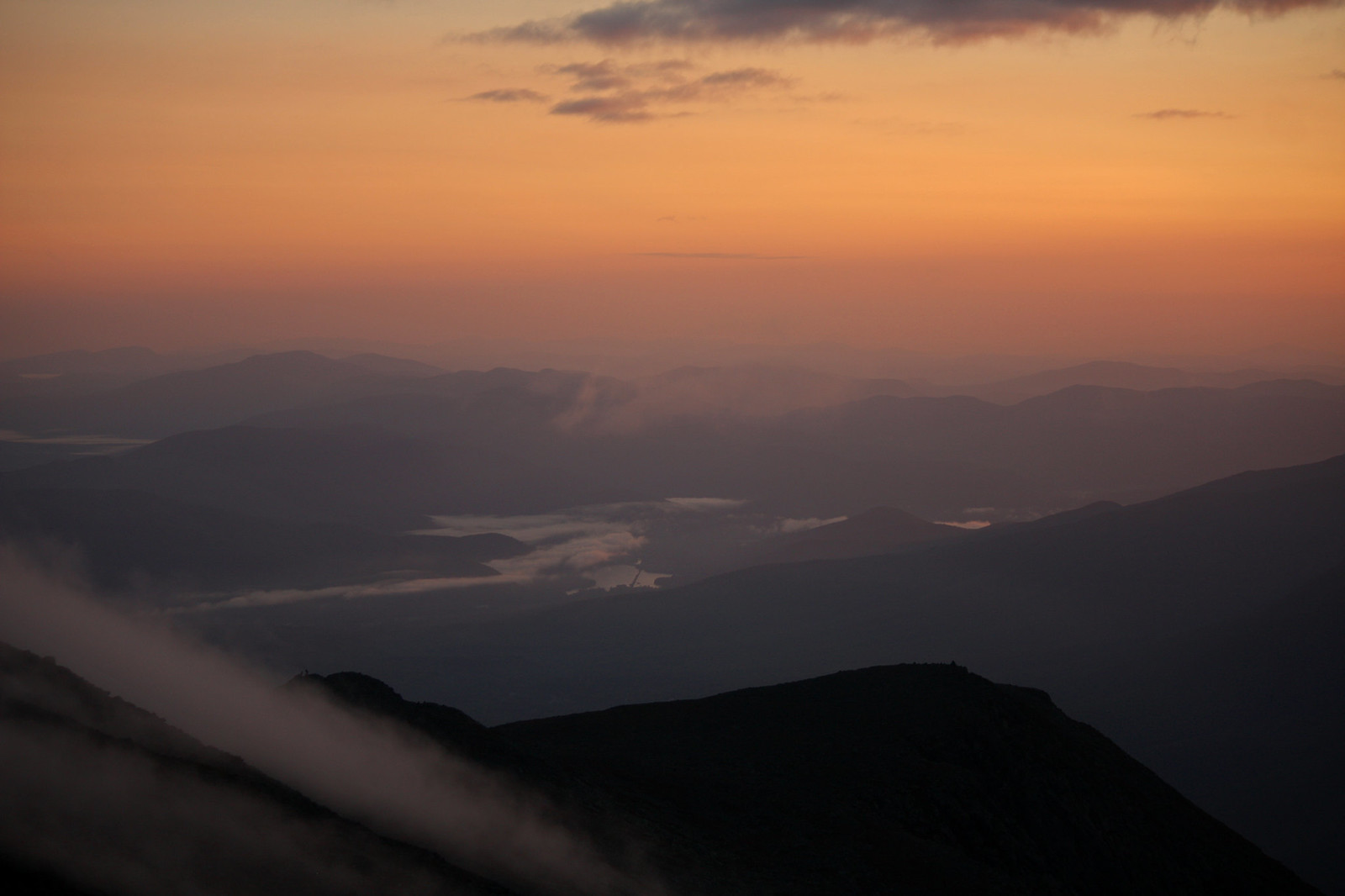 If you're ever in the area, its worth a trip up there at any time.

But, this being a car forum, I should probably share some pictures of that. 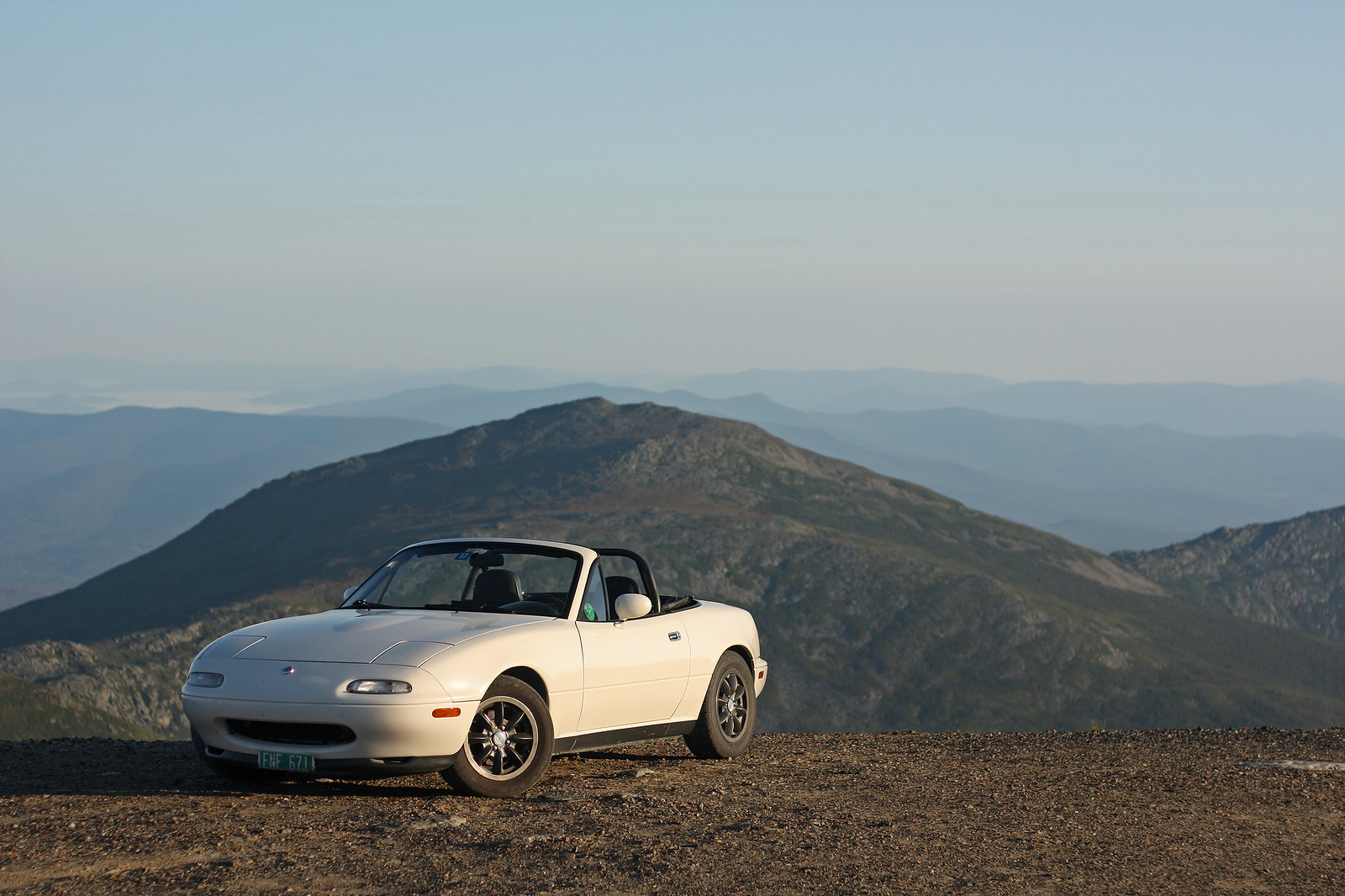 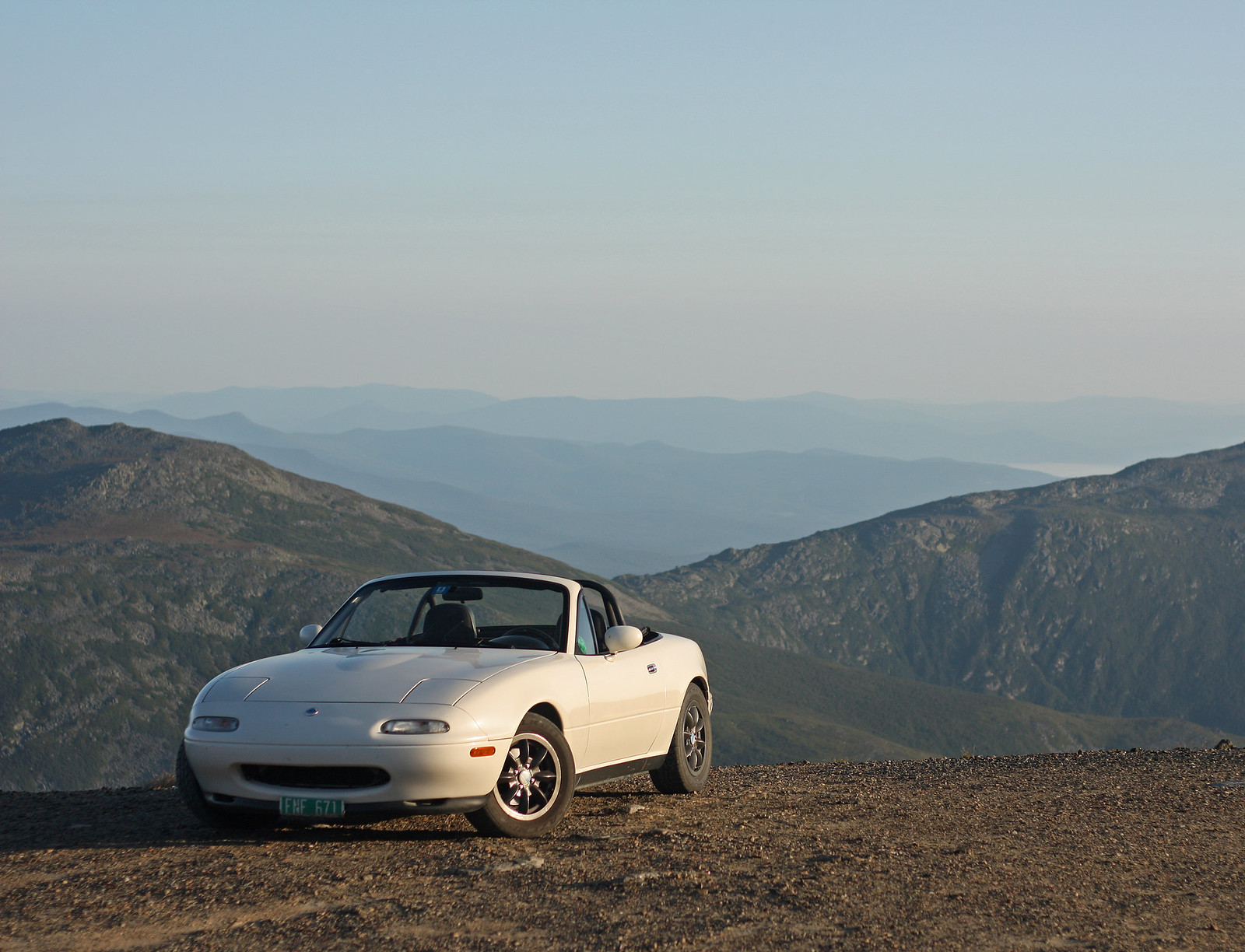 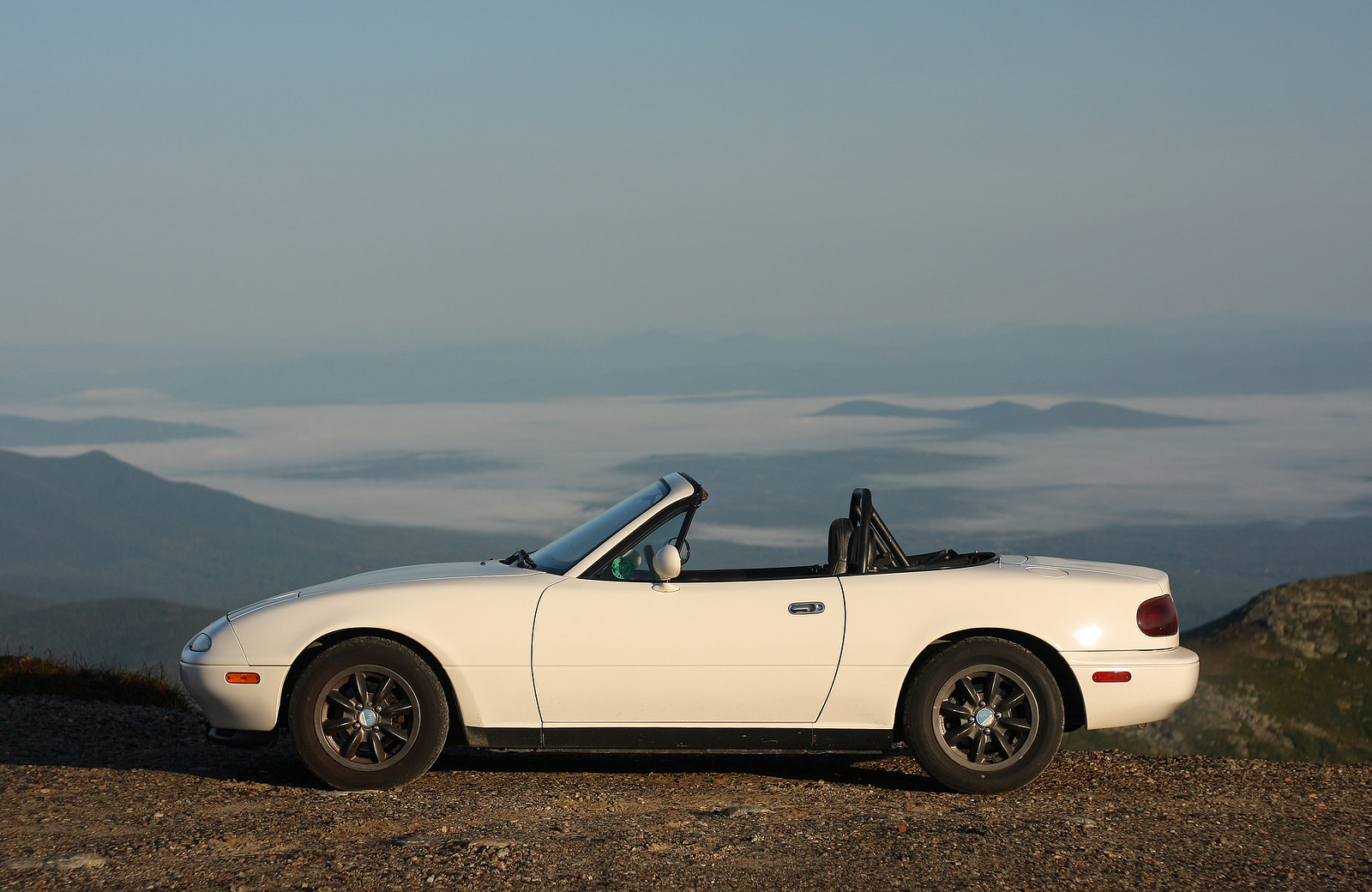 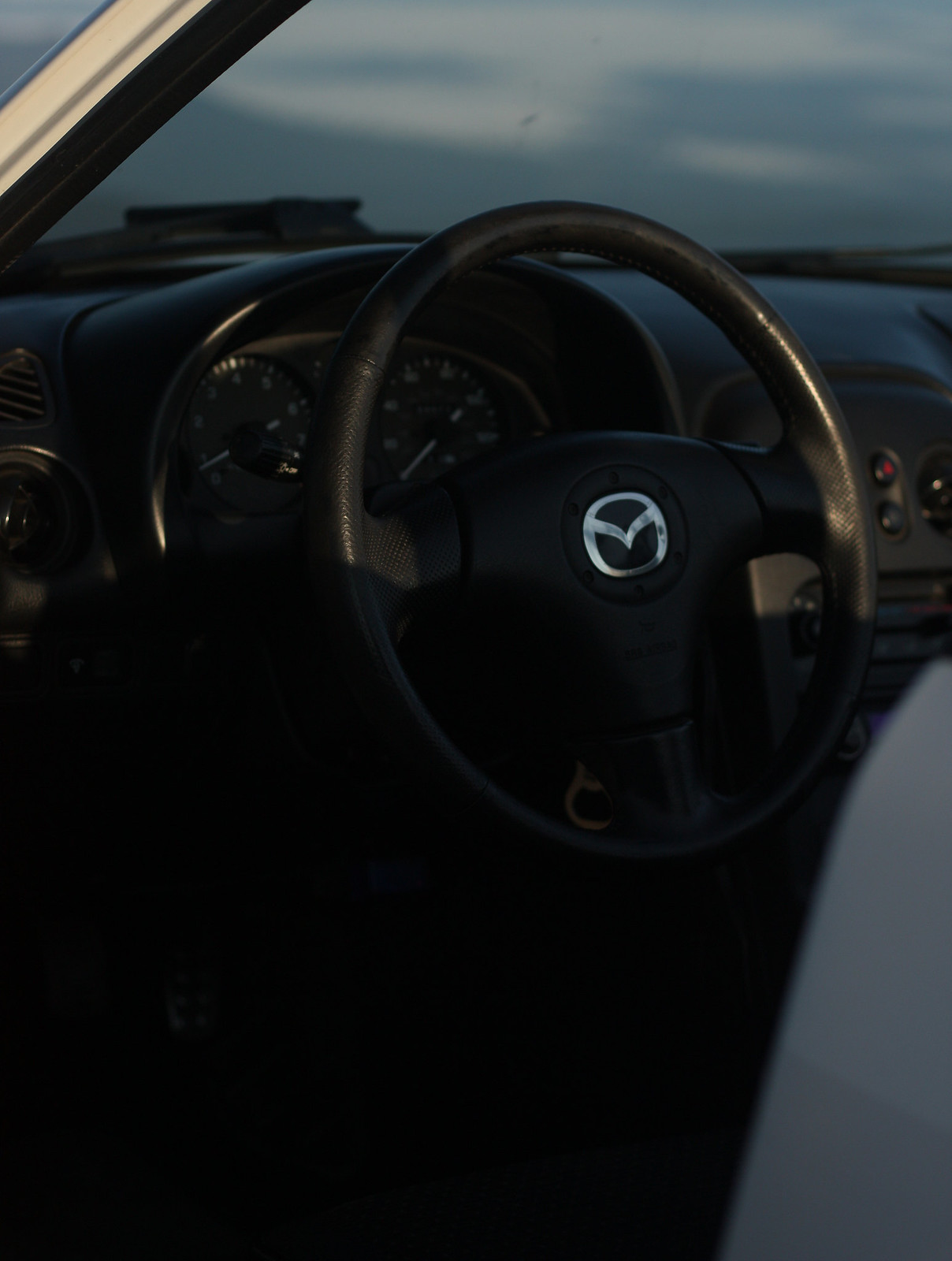 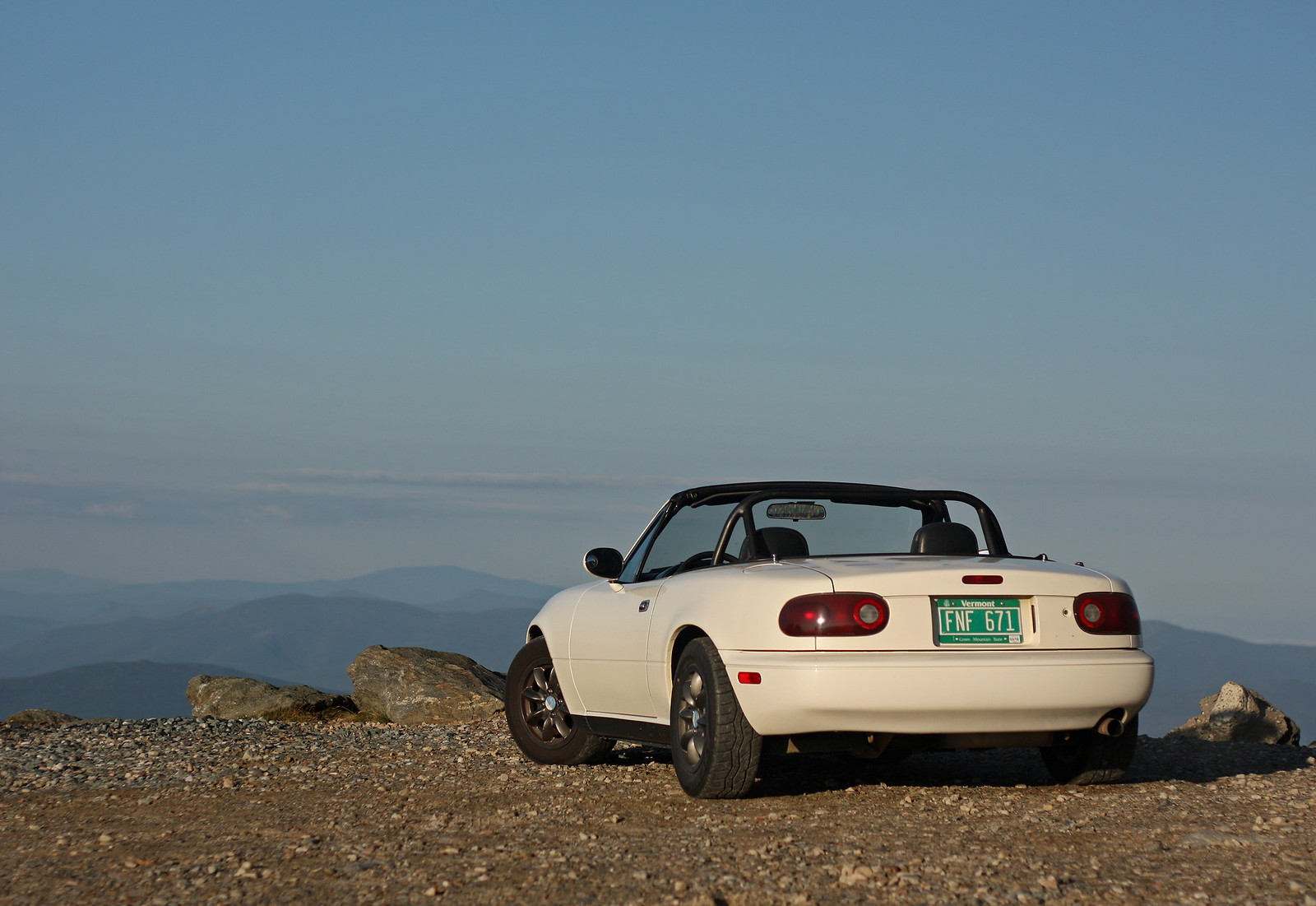 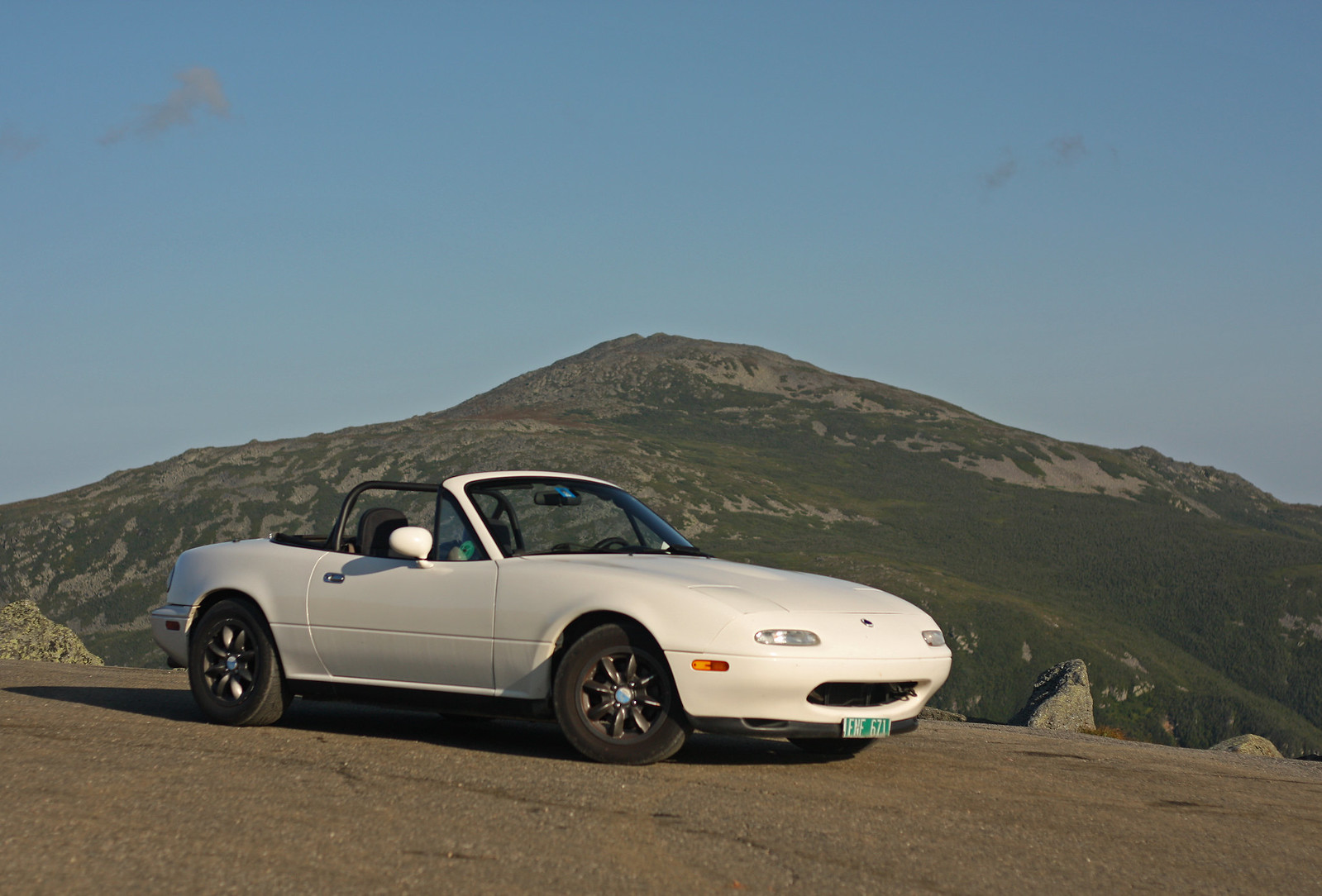 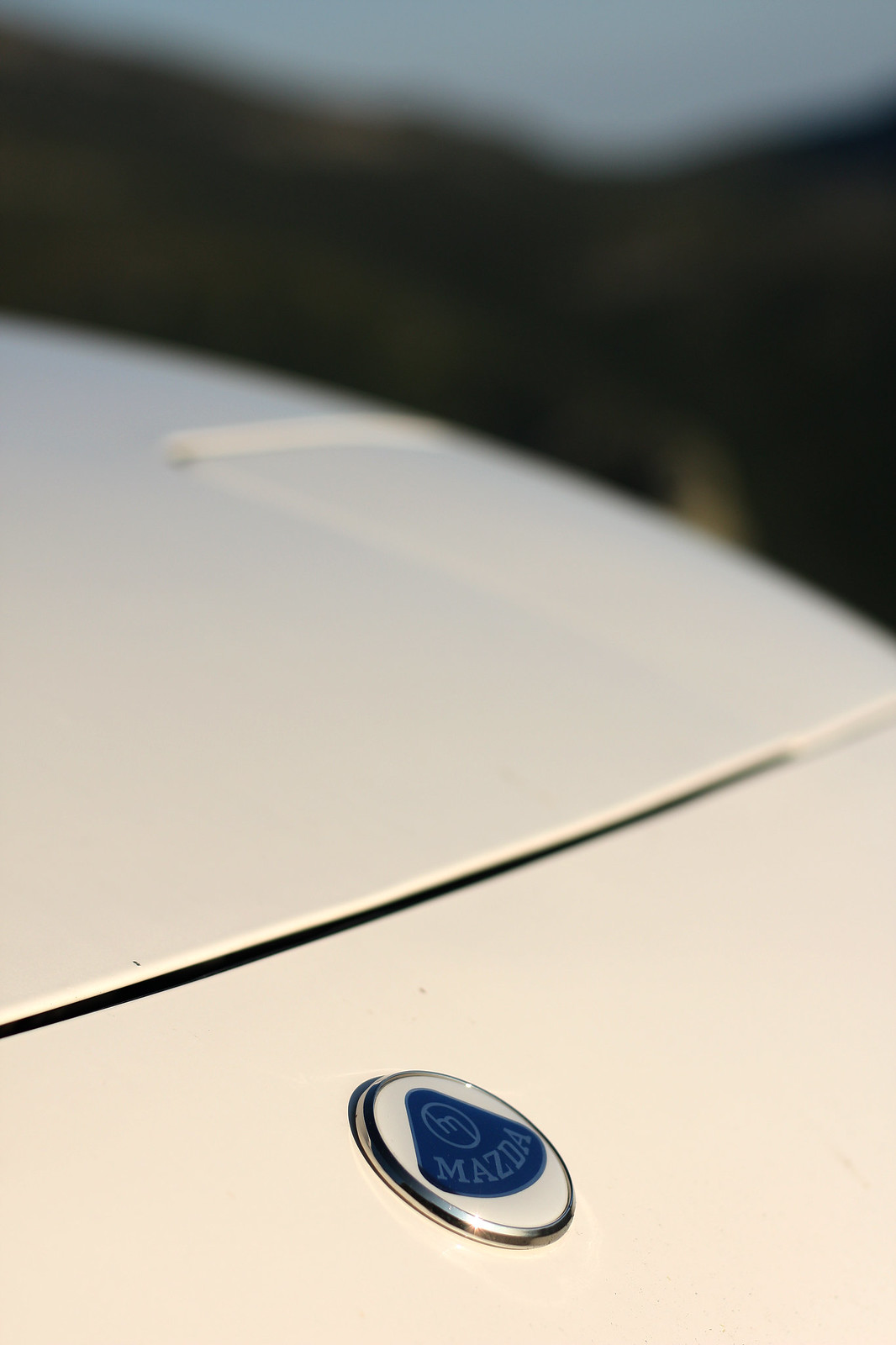 Joined Oct 18, 2011
·
736 Posts
Just got a summers worth of film developed. Perhaps unsurprisingly there were a few Miata pics... 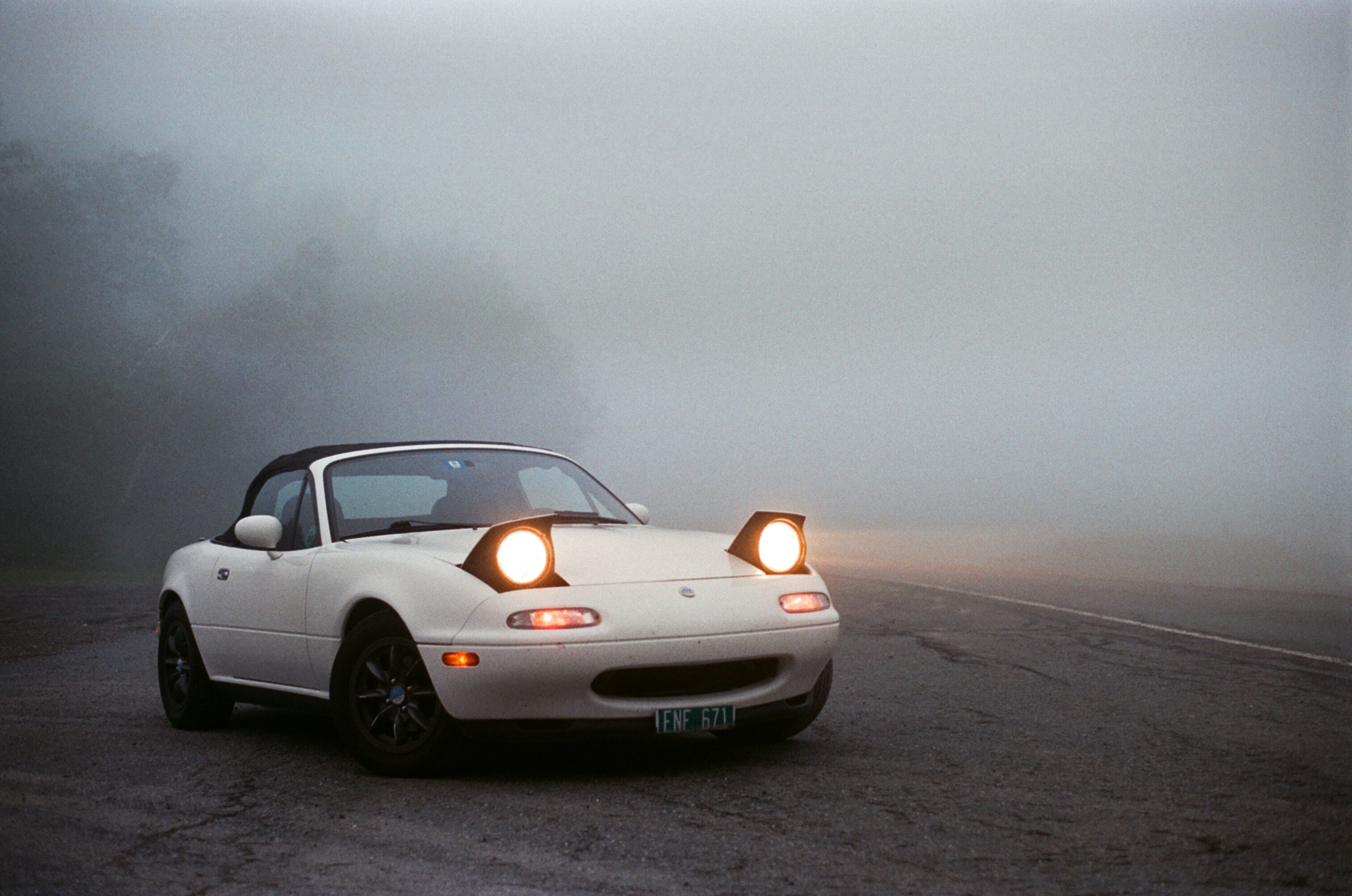 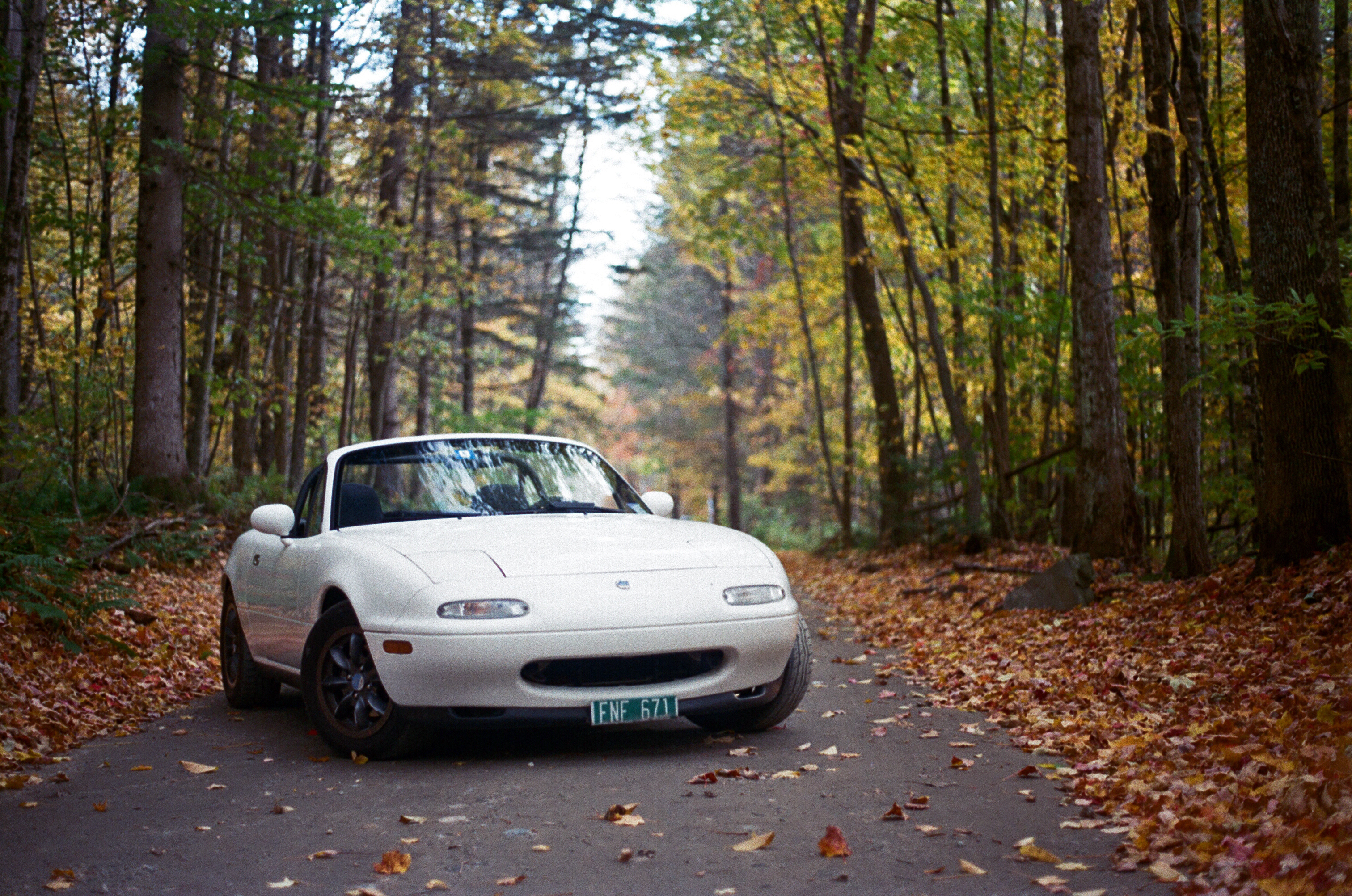 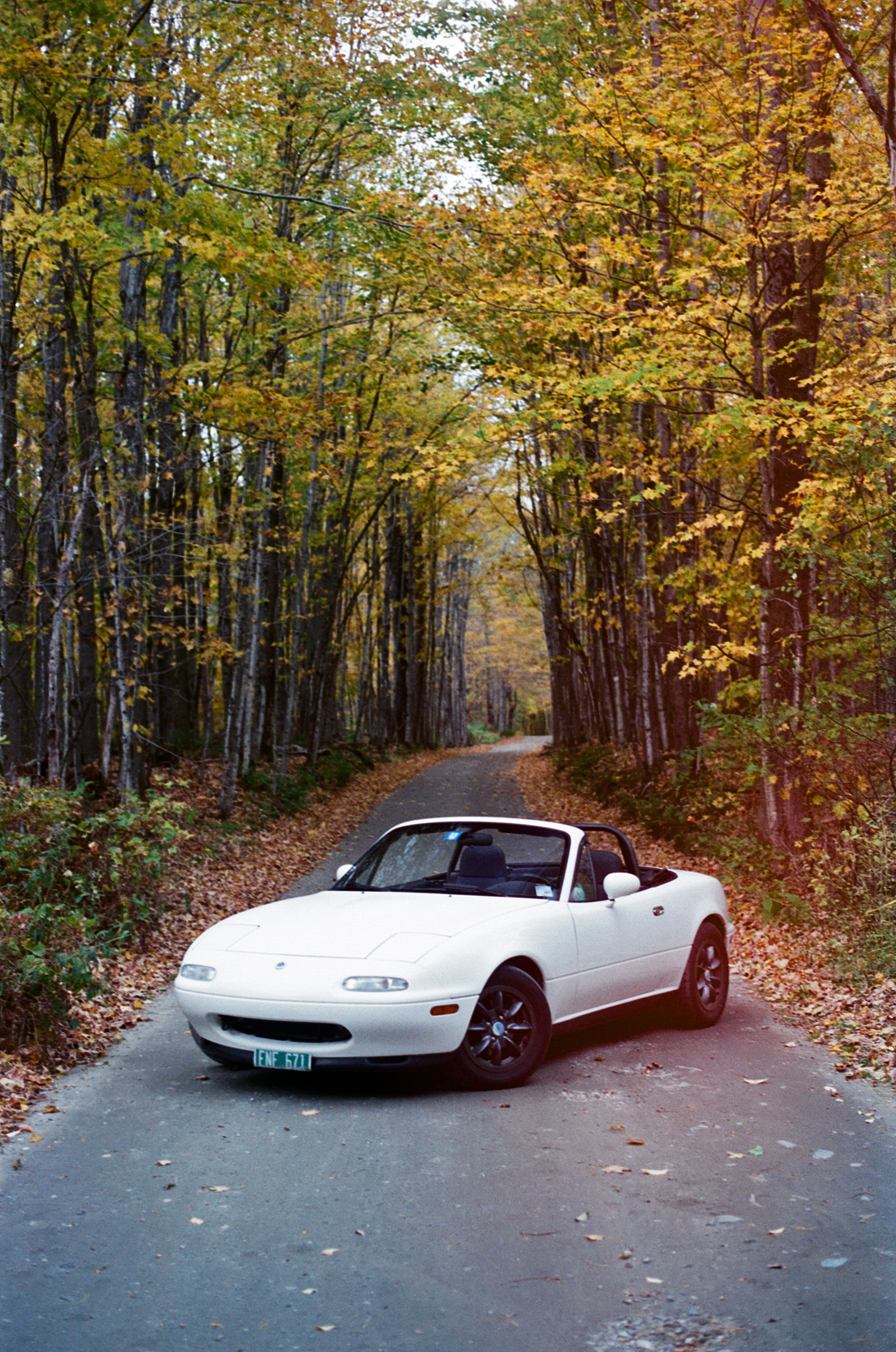 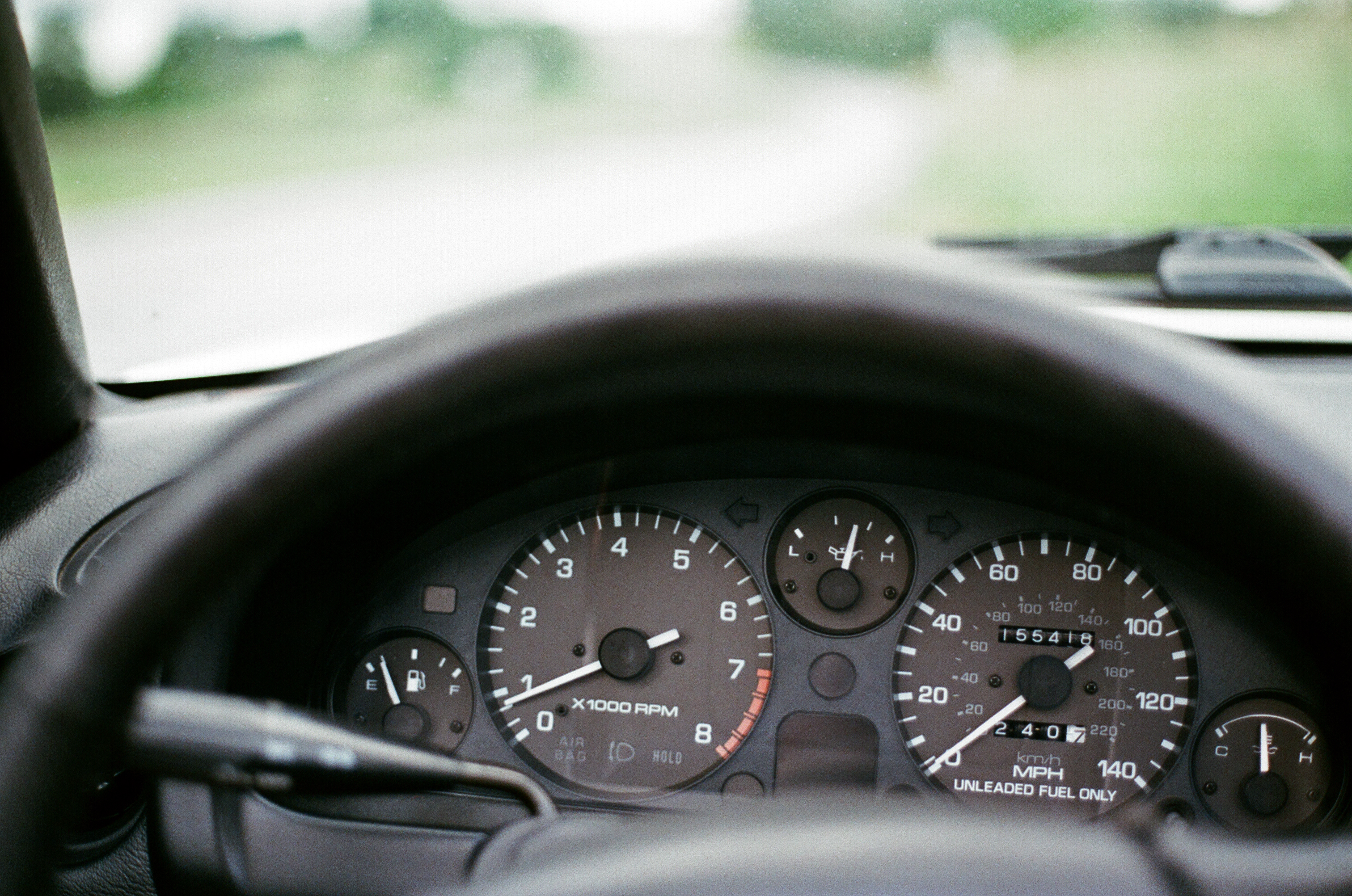 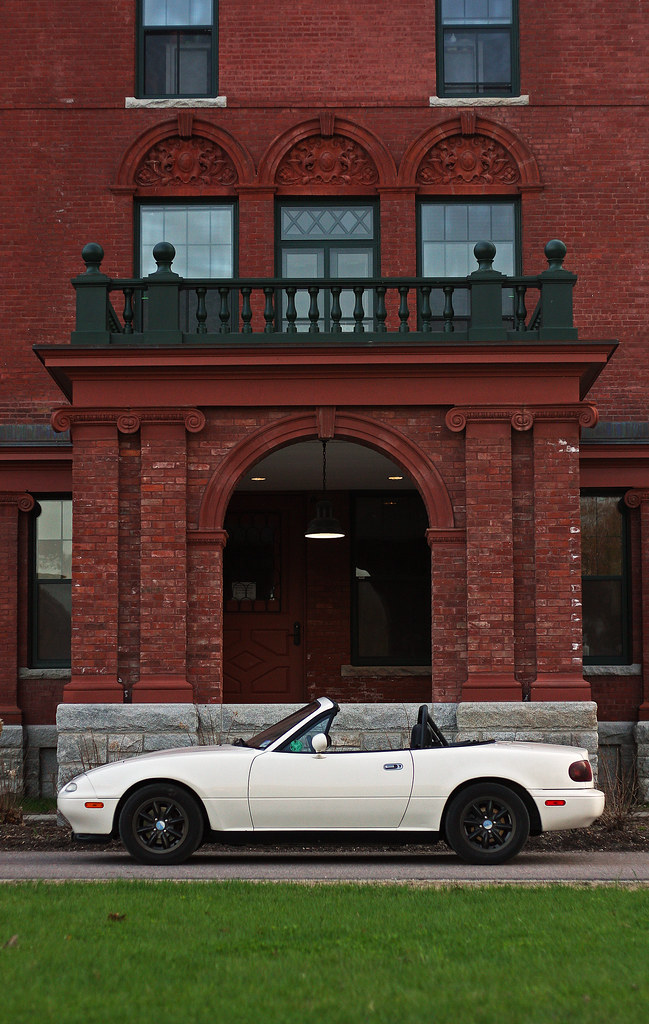 Dragged the car out and got to work improving some of the little issues which had been starting to pile up.

First up: refinishing the wheels. They were all covered in chips, tire machine scratches, and I did curb one... Not knowing how many layers of unknown paint were on them I decided to have them sandblasted by my old high school auto class, no charge :haiguyths:

And painted the same color as before:

Similar in nature, was addressing the black paint on the rockers. This had gotten seriously gravel blasted over the past couple years and a few chips had gone through the factory stone guard and started spots of surface rust. Clearly, that won't do. Sanded them down, killed the rust, prepped and painted with POR-15. I somehow managed to not take a single picture while I was at it, but here's how it came out.

Next was a shifter rebuild. At 165k miles I'm sure you all know how badly it needed it. The first time I left the driveway this year I missed 2nd gear twice. Ordered the kit from Moss with the 5X brass shifter bushing.

And back together, along with some fresh Motul Gear 300 I had laying around in the turret:

Needless to say it shifts a lot nicer now.

Finally, dyeing the steering wheel. While it's just a lowly Protege5 wheel it was in sorry shape and something I noticed and felt every single time I was in the car. I loosely followed Adams guidelines here: http://revlimiter.net/blog/2013/10/momo-prototipo-restoration/

Before, these pictures don't quite capture how rough it was:

The result is certainly not perfect, but it looks and feels a whole lot better than it did. <$20 and couple hours of my time will hopefully tide me over until I replace the wheel.

Also did some Vermont things:

It's amazing how much a few small things like that can detract from the car as a whole, and how much better it feels now.
101 - 120 of 127 Posts
Join the discussion
Continue with Facebook
Continue with Google
or sign up with email
About this Discussion
126 Replies
42 Participants
Last post:
Bryan 23 d ago
ClubRoadster.net
A forum community dedicated to Mazda Miata MX5 owners and enthusiasts. Come join the discussion about Mazdaspeed performance, modifications, troubleshooting, racing, maintenance, and more!
Full Forum Listing
Explore Our Forums
Pub Roadster For Sale or Trade General Automotive Chat Exterior Roadster Projects
Recommended Communities