Joined Jun 16, 2011
·
7,859 Posts
Why the name Spruce Moose? I love Mr. Burns and have been a long time Simpsons fan. This is the scene that made me want to call my car the Spruce Moose


On top of that all of our cars are named something to the tune of moose. My daily is Moose Force 1, my dads nc is now called Night Moose, and spruce is a very light weight wood so why not the Spruce Moose.

Hey guys I have a lot to say, but I am getting my bearings here.
The car was initially my dads car and we got it about 8 or 9 years ago. We have done quite a few nice things to the car but it didn't really become nice until the car became mine and I treated it with the love it needed.
I will have to backtrack to get a lot of info to be here.
Here is the most recent adventure.

Now updates for the car. I decided I really did not like the front lip. It was more trouble than it was worth so I am sticking with just the oem front bumper and no lip.

I purchased 2 oem radios with oem cd players and neither of them work. One of these days when i have more time and money I will send them to Jeff Anderson to get them fixed and have him install his aux in mod.
Edit: They have since been sold to MrMustang.

I took the car to get painted locally and told the guy I had a time frame of 3 weeks before miatas at the gap. Days before my day to leave for matg he tells me it wont be done. So I go with my dad to see what the deal is. We try to brainstorm and figure out what to do. One the verge of calling the trip of we decide to go to miatas at the gap in primer. So that is what we did. I figured I have gone with a lot of paint missing before why should this be any different.


We extended the matg trip a little and decided to go backpacking in the mountains for 4 days. We had to pack all of our clothes in that vintage suitcase on my luggage rack. We put the sleeping bags, food, ponchos, tent, hiking clothes, sleeping mattresses... A lot of crap in the trunk of the miata. I was able to figure out a way to bring the external frame backpacks with us. I bungeed them to the rollbar. Amazingly the roof was still able to go up and down.


This pic is right before we set of to go back packing.


Well on the matg trip in a miata run of about 40 people me of all people gets into an accident. Apparently a bear ran down the hill to our left, jumped over the guard rail and rain into the street to hit me. I acted quickly and made sure I was ok to swerve and dodged a head on collision. He managed to head butt my passenger fender spin re head butt my door and run off. (For those worried about the bear he seemed fine and ran off into the woods).

I was not the only person involved in an accident. There was one guy who just bought his miata and clear flew off one section of the mountain. He was ok but his car was totaled. Another couple drove off the side the day before while they were consulting a map. Then on a spirited drive the second day the roads were damp and mini_fd spun. I was maybe 3 cars behind and thankfully a local passing by in his truck pulled him out.


So here is a picture that Bryan took and in the photo you can see where the bear hit me.
It is very hard to tell that there was damage in this photo, but the damage was severe enough where I needed a new fender.

Well I did not let the whole bear thing bring me down so the next day i hung out with some cool people from the forum.

I am the one all the way to the left and my dad is next to me.

Believe it or not but the hiking trip had to be cut short. We strung up the backpacks with the anti bear stuff and everything should have been fine; well apparently the anti bear hook things are not anti chipmunk. One night the chipmunks climbed up and ate a hole through one of the back packs and ate quite a bit of our food. We took precautions for the next night but the same thing happened again. So we gave in and called the trip short.

On the way home the car hit 155,555 miles and also the speedo cable went on my so I had terrible high pitched screaming going on for the 16 hour drive back.


Once I got home I went and purchased a new fender from treasure coast miata and I stripped the car again to go in for paint.

Yay no more paint falling off when I drive or wash my car.


See I have paint on my trunk.

Well here is my miata at a car show.

I gave the car a good wash and I finally applied my oem sticker I have been hoarding until paint was done.

Better updates will be here soon, I am just getting all the info here.

almost a year ago I picked up a racing beat header off of Craigslist for the 1.6. I finally got rid of my exhaust rattles from the heat shield. The guy I bought it from owns a speed shop that sets up spec miatas and the original owner of the exhaust used it for a day and changed his mind for a Springfield.

It was a little bit tough.

Edit: Since this photo I have replaced the broken dipstick.

Just a quick post of what had come in so far. More to come in the next few days.

Gauges came in today and they are already installed. They look awesome, but don't take my word for it, just look at them.

The gauges have an interesting story. They are Smiths gauges. Smiths is a company famous for making gauges on old British Roadsters. They partnered up a long time ago with Rev9 to make an experimental set with a green back light to match the interior color of the Miata lighting. There was not enough interest in the gauge set at the time and they were incredibly expensive as far as miata gauges go so the idea was shelved for a few years. Through some google searching I came across the old blog on their website and inquired about the gauges. Apparently they still had the experimental set on the shelf in their warehouse so I bought them. As far as I know they are the only gauges of their kind.

Well this neatly showed up at my door.

Then I had to fix my mirrors that the body shop broke. Since I got a nice chrome gas lid why not get a matching set of mirrors that I had been lusting over for a long time.

So I now have these.


Sorry that these photos were taken with a potato. I will get better photos when they are on the car at home.

And here is the mirrors installed.

Car is looking great! Really like the Smiths gauges and one of a kind is always cool! :icon_cheers:

I had to add more wood to the Spruce Moose to spruce it up.
This just came in hand made from England. Only took slightly over a month to get the exact wheel I wanted. It is a non dished / flat wheel.

Here is a nice photo of it installed shot from my dslr.

The wheel looks awesome, love the mirrors too.

Thanks. What I really love about the wheel is the horn button. It is all billet aluminum and in the center it has a mazda logo to give it that possible oem look. Here is the plastic horn that it came with. I am showing it so you can get a good look of what the button emblem looks like. I was seriously blown away to the point where I think it was modeled after an oem design.

Its about time you set up a build thread. Dear god I love those Smiths gauges! Car looks fantastic and love the luggage case.

I had an old build thread but I have not posted in it in a long time and it was mostly filled with questions as to what direction to take my car and me pondering about what to do with a car that was lacking paint. Spruce Moose is all about the miata built for Andy that looks nice and not something that looks like it was a junk yard special.

My oem nardi teardrop knob I had was a more mahogany color and a very nice person on mazdaroadster was willing to do a straight trade with me so that I could have a knob that matched perfectly with my car. I know it is pretty hard to find the knob and even harder to find someone willing to trade it so thank you very much.
My new to me knob is the one on the left. Old one is on the right. 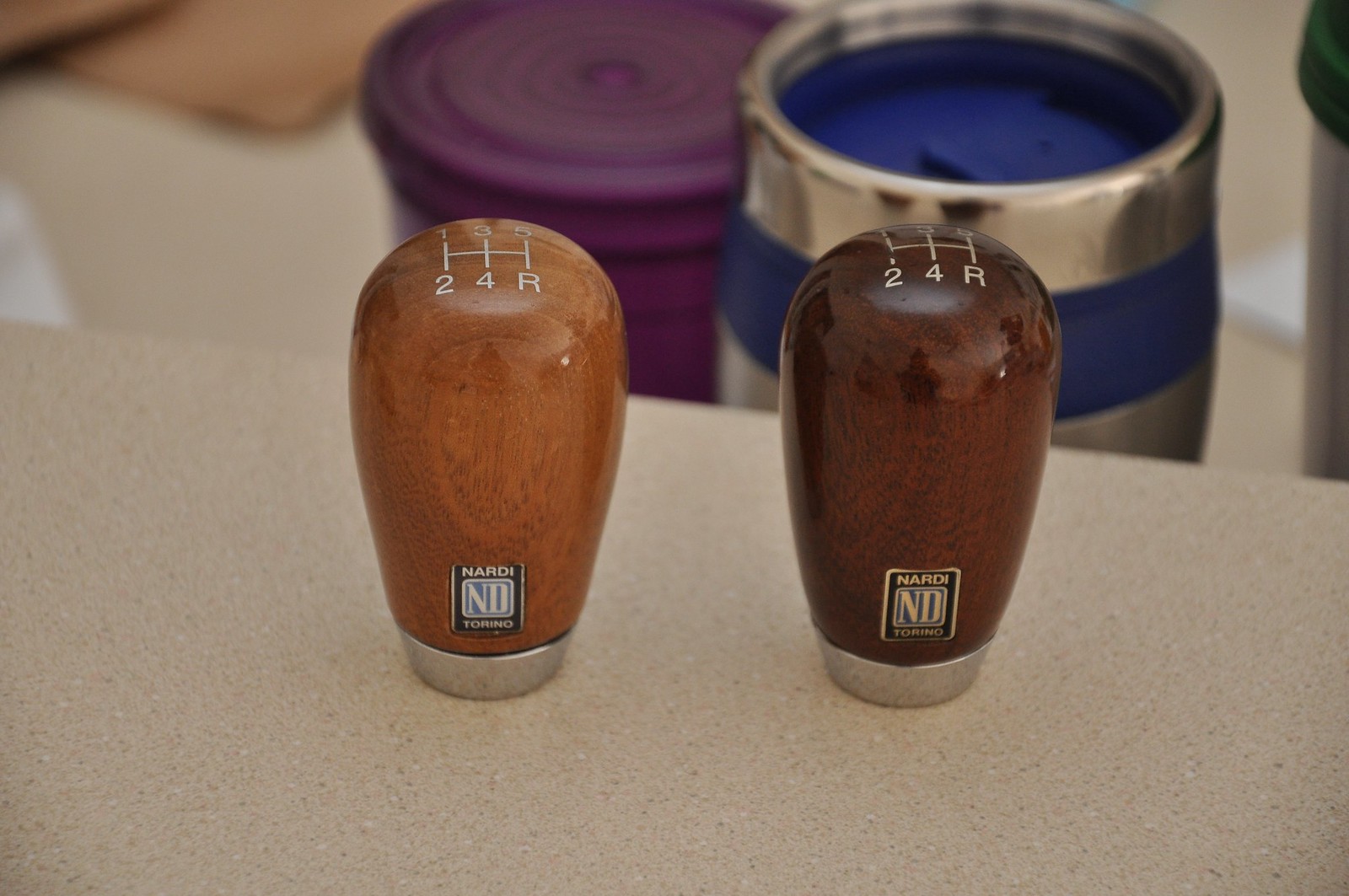 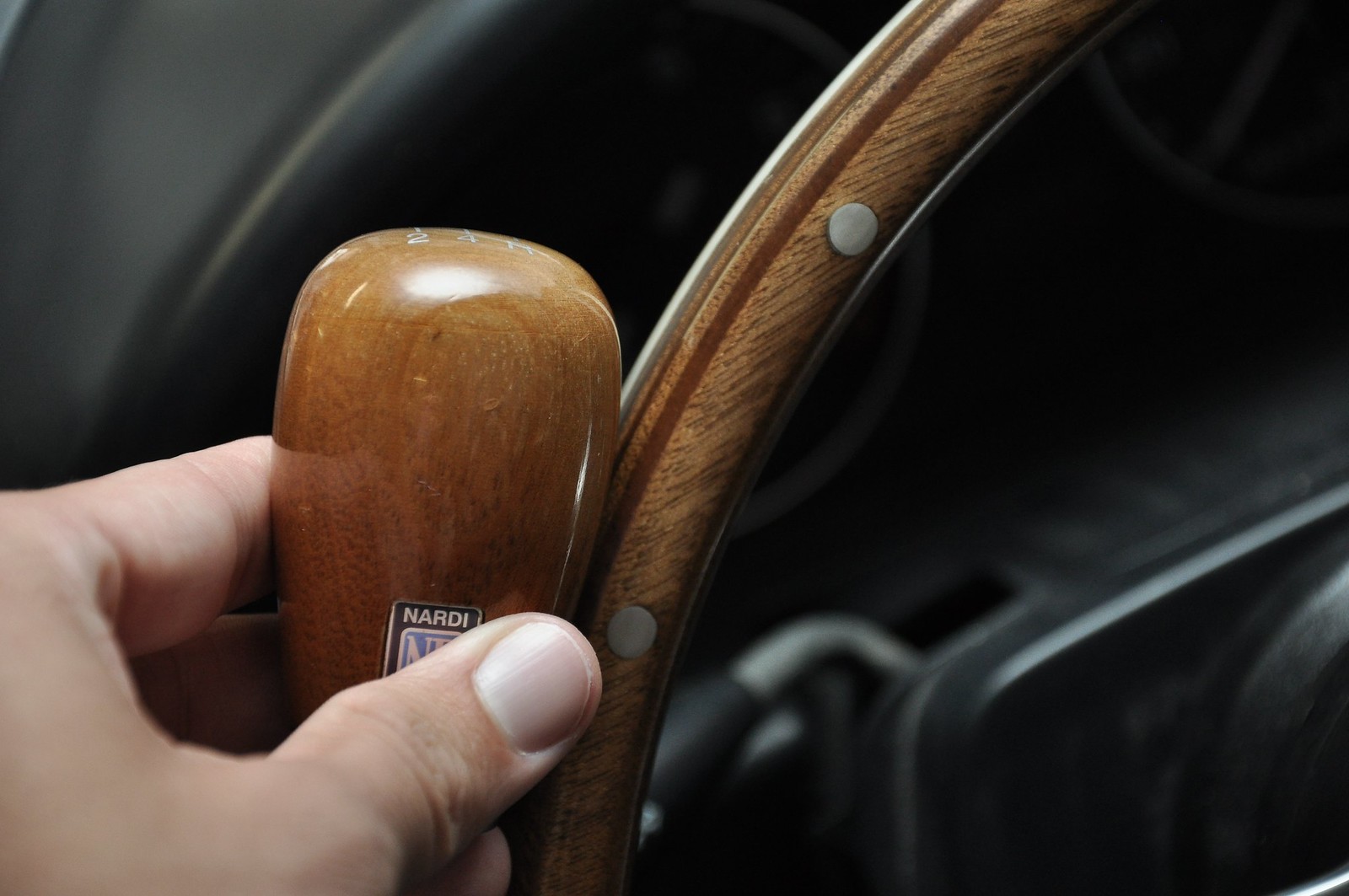 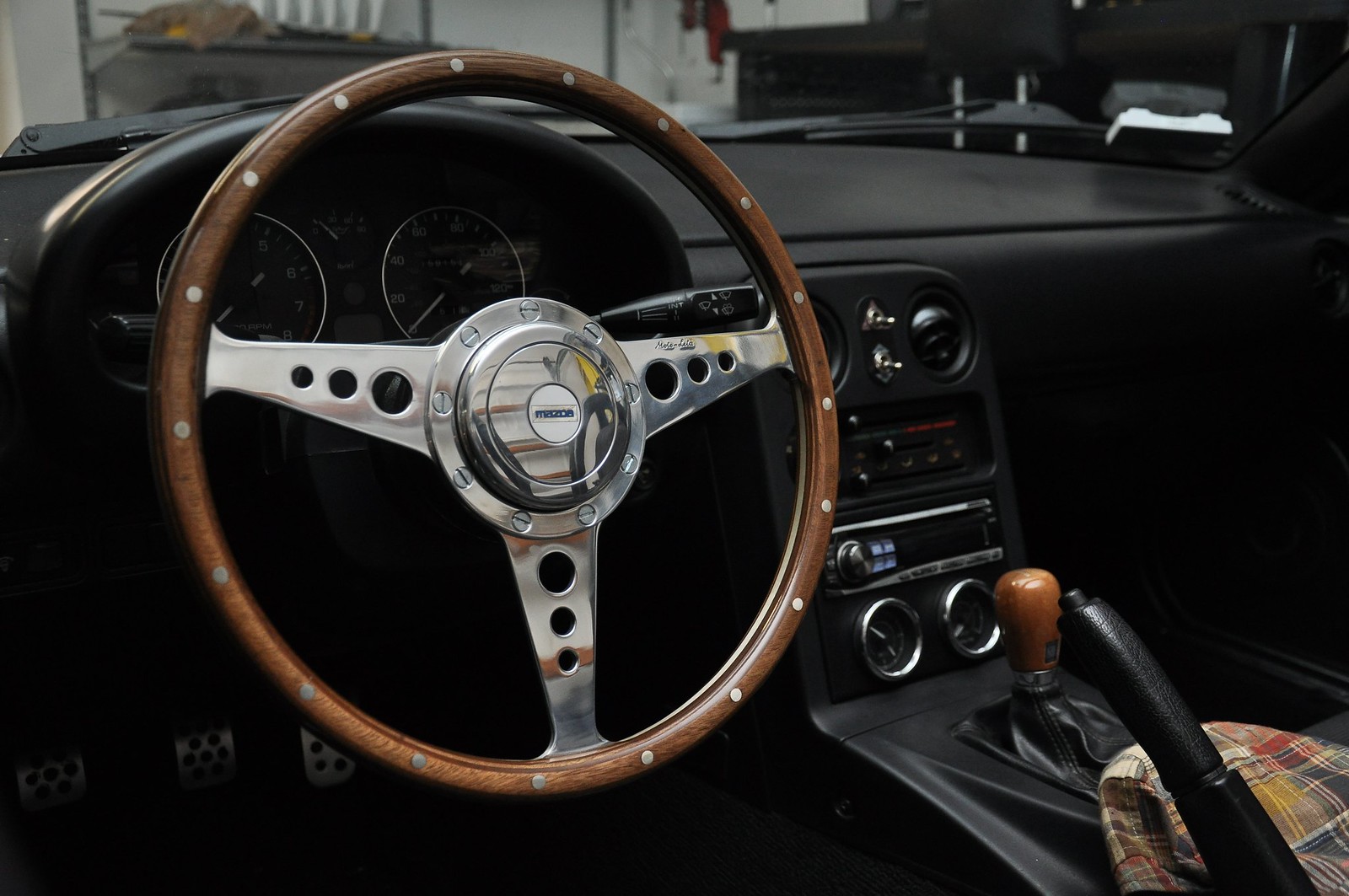 You should try making your own matching wood vent rings.

I guess I never updated this post with my latest purchase. I got my hands on some checkerboard oem floormats. Sorry for the crappy iphone picture. Better ones will be on the way when I get the car fully prepped for MATG. 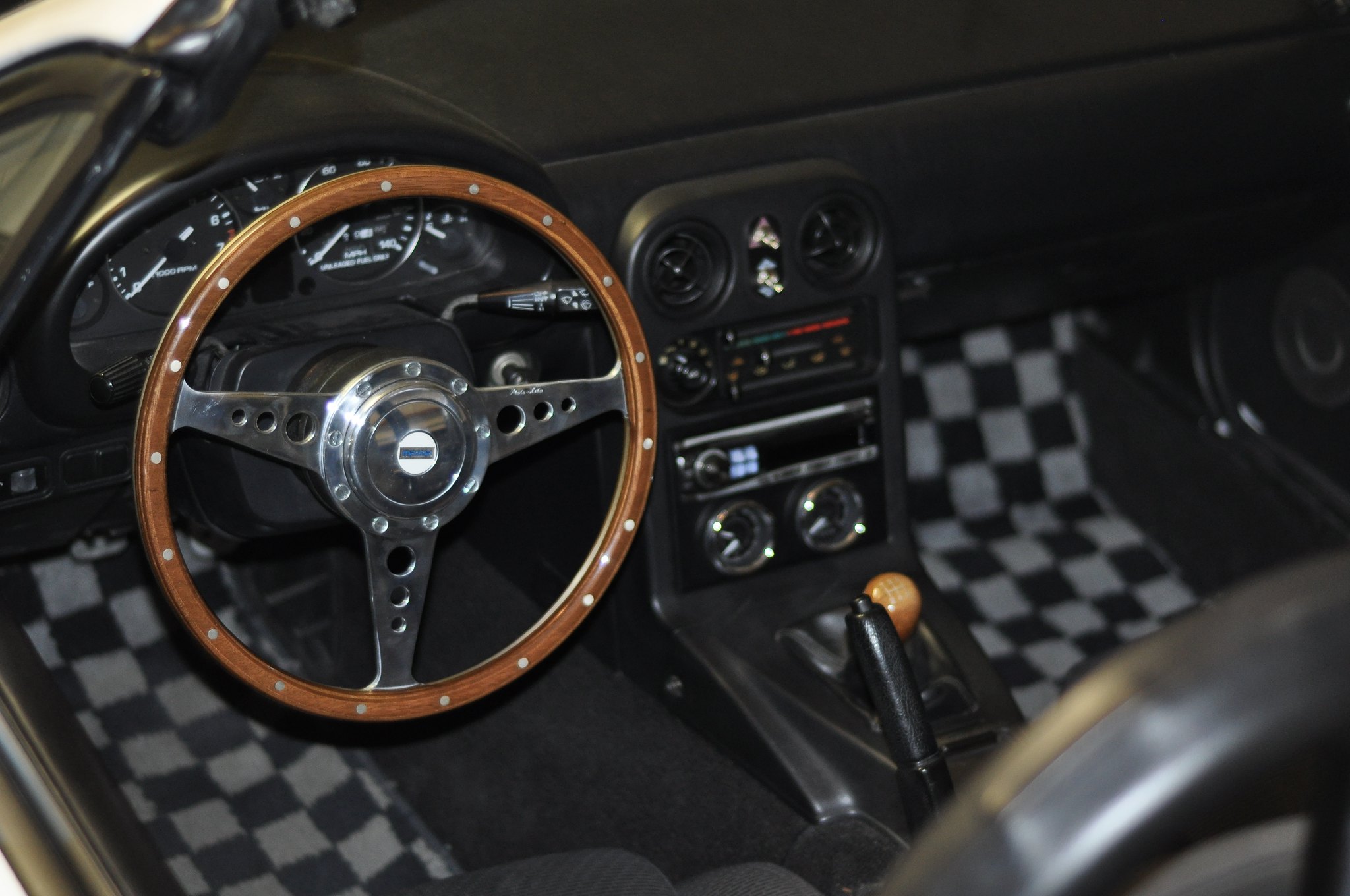 Somehow I missed you at MATG last year. Love how the roadster's coming along! I'll be there again this year. ChrisJuliano, blu92 and I have a cabin with a few other people. We're gonna have some N64 tournaments if you feel like losing at Golden Eye or Smash Bros