The Tick aka OEM Plus™

Tags
mods oem plus the thiccc the tick

sdemo45 said:
Also would not recommend open ended unless you actually have extended studs.
Click to expand...

Water and dirt can get onto threads and rust.

sdemo45 said:
Water and dirt can get onto threads and rust.
Click to expand...

Fair enough. Since most of the fancy stuff is open-ended, do you know of any high-end closed end lug nuts?

Bryan said:
Fair enough. Since most of the fancy stuff is open-ended, do you know of any high-end closed end lug nuts?
Click to expand...

I think the ones Goodwin racing sells are closed ended.

Andy said:
I think the ones Goodwin racing sells are closed ended.
Click to expand...

Thanks! Didn't realize they had some.

Speaking of which: this seems like a good purchase for the future.

Bryan said:
Thanks! Didn't realize they had some.

Maybe?
It would depend on how much you want a 20 year old airbag or not.

If you are open to removing the oem airbag, I'd suggest going with something like a momo montecarlo for your car. I'd also repalce the seatbelt reels with those from an NA8 and i'd remove the safety loop stitching.

If you want to keep the oem airbag by all means necessary, then go with that spacer.

Joined Apr 1, 2006
·
34,940 Posts
Yeah, plan was to keep the airbag. I went without it on the old car and always felt sketchy about it. Stock NB2 wheel is nice enough. Just be nice to get the wheel off my thighs.

And run whatever wheel you want. The stock airbag is a relic. If you’re in a position where you need it then it probably won’t matter. The steering wheel is one of your vehicle inputs. Make it count.

Joined Apr 1, 2006
·
34,940 Posts
Main reason for switching lug nuts was getting rid of my spine drives because I don't like having to keep an adapter.

I installed the new head unit and even got the kids involved!

Started with the Metra adapter that Crutchfield sent along with the harness from Pioneer. I also bought a $10 Parking Brake Bypass off Amazon and wired it in:

My son listened as I explained all the functions, then went back to Minecraft:

When I finished, there were three unused wires. On the Metra adapter, the Blue wire for the powered antenna was left out because it's not on the Pioneer harness. On the Pioneer harness, the Mute and Reverse Gear (for backup camera) wires were left off because of course the Mazda harness doesn't have those. I taped them off.

This morning, I started on the install. My son was going to help me by holding the light and screwing things in. His sister got word that we were working outside and wanted in. Since I had nothing for her to do at the moment, she read quietly.

I did a test fit and made sure everything worked. Once that was done, I taped up my new main harness:

I didn't take a picture, but my daughter helped me by running the wire for the microphone through the dash to the back of the radio cavity. With that done, here are the four inputs: Mic, Antenna, Main Harness, and USB.

My son had to run in to eat lunch and get dressed for hockey practice, leaving me to button everything up. Here's the finished product!

Thanks to the long USB cable, my phone got relocated to the console out of sight. I ran the cable the length of the console and popped it in under the switches for the trunk and gas lid. Now I have nothing in front of my hands or the radio (which means that fancy ProClip mount I paid like $80 for is now useless, lol)!

Lemme get that proclip mount pls kthx.
Click to expand...

I had just dropped the ProClip on Marketplace, but let's chat

Joined Apr 1, 2006
·
34,940 Posts
Took a road trip yesterday because I figured it might be my last chance this year to really go out on a trip. I drove about 2hrs south to the Woodford Reserve Distillery. They weren't offering tours, but I was able to buy for myself and several buddies from the gift shop and also got to see an old friend while I was down there. The trip was mostly about just getting out in the car and forcing myself to trust it (the jack and full tool bag I brought along never left the trunk). That trust was rewarded with a nice drive and beautiful weather.

Kind of wish I'd have taken more pictures, but such is life. 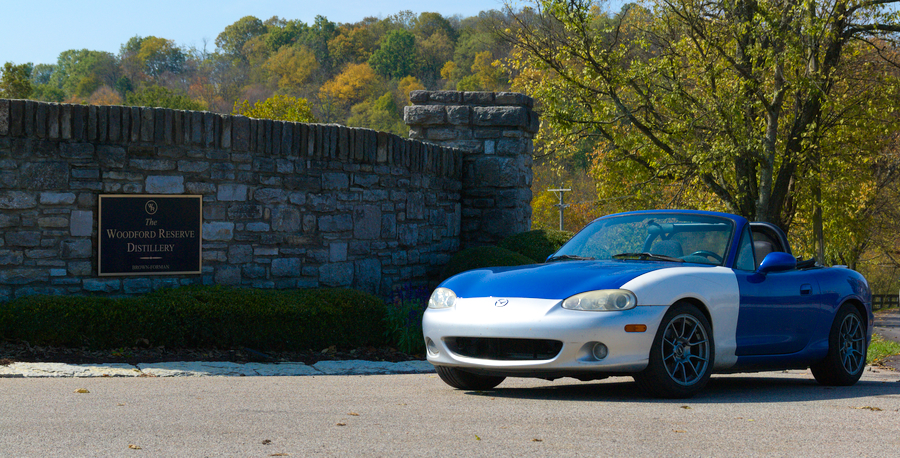 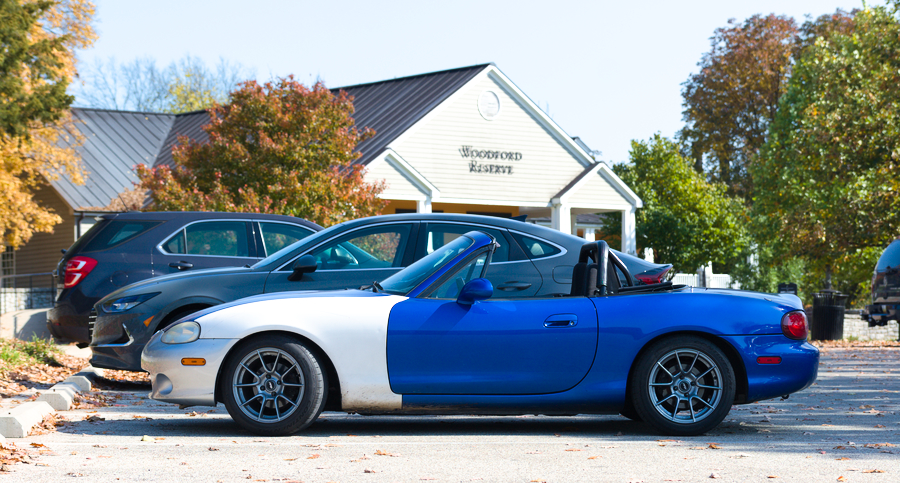 Andy said:
Anything aluminum open ended and using a 19mm hex head.
I think 949 and FM have the same factory in China making them and I’ve found the same lug nuts on eBay for $20 or so.
Click to expand...

No idea where FM's are made. Our forged 7075 T-6 lugs are made in Taiwan. We don't make any proprietary product in China. Just a few bearings and generic supplies.

Car's laid up for the winter, I guess...I need to wait for it to warm up enough to go fill the tank back up before I do it officially.

Joined Apr 1, 2006
·
34,940 Posts
Tried to adjust the clutch pedal today. Forgot about the car's recent tendency to become difficult to put into gear. My experiments suggested that for whatever reason, the clutch pedal rod was adjusted too long, constantly pushing the slave, causing the premature ToB wear on my old clutch and what I suspect was a heat issue on my new one. When I had a look, sure enough, the rod had been adjusted almost completely out:


It's hard to see, but in person, the rod was almost out of thread to be adjusted longer.

I went ahead and shortened it and reset pedal height. Took the car for a short drive, and everything seems to be better, but it'll matter after I get a longer drive in. That will have to wait until my wife comes back home from out of town. Probably will have the little dude run pedal for me so I can bleed the system again.

Since the kids were playing happily, leaving me with no immediate responsibilities, I decided to vacuum out the Miata and, while the car was out, its garage spot. That also led me to clean out stuff in our backyard shed and do some minor seeding of the lawn (yes, my son deals with ADHD...what was your first clue?). Before that, though, a couple mods I spent money on.

Simple install but true to form, it took longer than expected because I couldn't get the screws to go in straight, then dropped one onto the undertray...also, now I have to slam the hood to get it to latch.

Also, I hit up Treasure Coast Miata for Ford Escape/Mazda Tribute windshield sprayers. That turned out to be pretty easy

After that, backed the car out, pulled both seats, and started vacuuming:

Another (sadly not as good as I'd like) shot of one thing that keeps me in this car:

Joined Apr 1, 2006
·
34,940 Posts
Didn't get any pictures, but I just installed Paco Motorsport Strong Arms over the weekend. Many shout-outs to Mike (chiefmg) for helping me with the install. Mark really thought these out very well, IMHO. I'd imagine for hard-core track dudes that these are not sufficient, but a 6lb penalty per side is a small price to pay for a car that is MUUUUUUUUUUUCH better behaved over train tracks, expansion joints, and other small imperfections. I can't quantify it, but the car handles more pleasantly (probably due to better chassis behavior over mid-corner bumps).

Issues to be dealt with sooner than later:
I am cautious about it but my shifting issues have not returned following the clutch pedal rod adjustment. It appears to be another thing the shop screwed up. I won't let Turn-In Concepts touch my car again unless they're paying me.

Joined Apr 1, 2006
·
34,940 Posts
Solved the problem with the hood needing to be slammed--I think. Cut a little bit off the two rubber bumpers on either side of the latch.